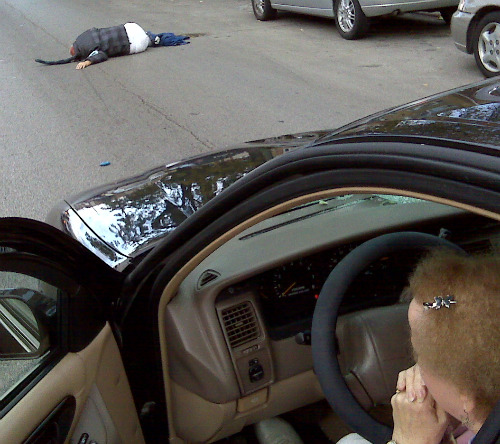 Saterday morning was full of additional work for City of Chicago Derpartment of Water Management employees, Patrick McDonough, Ron Bober, and Al Treadwell. The man has hit with such force, it knocked him a few houses from the intersection. His pants were knocked nearly off. He had multiple trauma. The lady driving was in a panic. There was lots of blood everywhere. Our crew assisted until the police and Chicago Fire Department arrived. The police asked the CFD to “Step-up”. I have some pictures of our crew in action. This is not the first, nor the last. I hope the department shows some appreation to these all American heroes. Photo by Patrick McDonough. accident October 2, 2010 at 6300 West on Belmont.