<![CDATA[<img alt="Mayor Daley 2011 official picture" width="221" height="228" style="float: left; margin: 0 20px 20px 0;" data-src="https://www.chicagoclout.com/Daley%202011.jpg" class="mt-image-left lazyload" src="data:image/gif;base64,R0lGODlhAQABAAAAACH5BAEKAAEALAAAAAABAAEAAAICTAEAOw==" /> Mayor Daley and his goons have one powerful weapon that controls the elections in Chicago. Contracts. Mayor Daley and his family prospered despite the boom and bust cycles of the economy. The FEDS never took the time to take apart the miracle minority fortunes made almost overnight. The Office of the Inspector General never made any connections to the upper Daley family confidents that decide who gets what and when. When a minority company is blessed by Daley, they show up all over the State, County, and City. The Chicago Unions keep away and workers are paid well below prevailing wage. The insiders have their flavor of the day, when the ice-cream melts so do the contracts. John Kass wrote a great article about Morales, it is below for your entertainment. Morales rests in jail and no reporter asked Daley what he knew; they did not want to offend Daley. No reporter asked Daley if his administration launched an investigation into the City officials that had contact with Marco. I guess they do not want to offend Dick Tator. Patrick McDonough.]]> END_OF_DOCUMENT_TOKEN_TO_BE_REPLACED 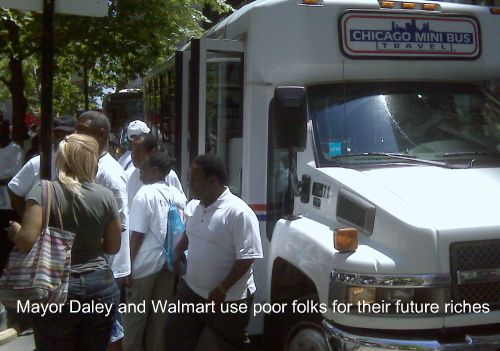 December 26, 2009 Plumbers work hard, earn their pay
While I agree with critics who say the city plumbing inspector accused of violating codes should be fired, why bring his salary into it?
I am a union plumber and proud of my trade, though I’ve been laid off for 21 months.
What do critics think is a fair wage?
If I were working now my salary would be similar, though as a private-sector plumber I would not get paid holidays, sick days, vacation, etc.
I am tired of people commenting negatively on our pay and charges for work performed.
I and every other union plumber out there went through five years of apprenticeship, and we work very hard to earn that money, whether that’s rodding out sewer systems, plumbing single-family homes or 95-story high-rises. We do the work that you don’t want to or don’t know how to. It’s a skilled trade, and you pay for that skill.
Without qualified plumbers and the plumbing inspectors, everyone’s health could be put at risk through improper water connections or sewage disposal.
Instead of complaining how much a plumber makes, next time thank him for providing safe drinking water for you and your family and for getting that razor out of your sewer that you flushed down the toilet so your home isn’t backed up with raw sewage.
Michael Hanley, Canaryville
Doing the crime — but no time
Former Ald. Ed Vrdolyak gets caught trying to steal million-plus dollars. He gets a couple of football players to write the judge a letter. He walks.
Former Streets and Sanitation Commissioner Al Sanchez, convicted of fraud in a City Hall hiring scheme, waits around long enough and finds a judge to reverse his conviction.
City plumbing inspector James Kendrick, working without a permit and using city materials for free, gets his job back.
A reputed made man in the mob, now behind bars, finds a judge who grants him the OK to go to a top-notch restaurant on Christmas Eve.
My money says Blago walks.
Any takers? Gary Odom, South Shore
(Chicago Clout Responds)
I hope you enjoy this Chicago Sun-Times Reader’s response to the James Kendrick Story. The extent of the story goes far beyond what these comments write. I am sorry to report this Plumber really has no clue as to what is really going on regarding Plumbers and Plumbing positions in Chicago. The Chicago Plumber’s Union has one of the worst unemployment rates for a “profession” in Chicagoland. Local 130’s unemployment rate is about 85%. The dues and fees are in the thousands every year. James Sullivan a hack at best, rehired the same bunch of bust-outs to continue the corruption at the expense of the membership. In Chicago, there are no new Apprentices which might cause the termination of the do-nothing teaching staff. One of the guys writing into the Sun-Times assumes Plumbers in Chicago are trained to do the job; many of these licenses are bought like candy over the counter. Michael McGann, a famous Chicago Plumbing Inspector will walk us through the buying and selling of Plumbing Licenses in Chicago next week. There is a much greater problem with the Plumbing license law in Illinois than most people realize, so you might want to consider bottled water for your family in Illinois until the problem is resolved. The City of Chicago again should thank Fran Spielman for another story that goes deeper than meets the eye. Patrick McDonough

Fired city inspector is back at work
'BETRAYAL OF PUBLIC TRUST' | His job was to bust people for working with no permit — he did side job with no permit
December 23, 2009
BY FRAN SPIELMAN City Hall Reporter
A $93,840-a-year Chicago plumbing inspector caught doing a side job with no permit, city license or secondary employment form allowing him to perform the "side job" is back on his main job.
The Human Resources Board, which is appointed by Mayor Daley, has overturned James Kendrick's firing and converted his punishment to a five-month suspension without pay, which he has already served. Kendrick returned to work Thursday for the first time since July 17. He refused to comment.
The board agreed that Kendrick's behavior "warranted substantial discipline," but not the firing ordered by Buildings Commis- sioner Richard Monocchio, said Buildings Department spokesman Bill McCaffrey.
"We felt justified in terminating him. This was a betrayal of the public trust. He's a plumbing inspector in the Troubled Buildings Bureau. He . . . knows that, in order to work, you need a permit," McCaffrey said.
The Chicago Sun-Times reported last summer that Kendrick was installing a flood-control system for a homeowner in the 3500 block of North Octavia when he inadvertently broke the water pipe leading to the home.
When Water Management investigators arrived, they found that the homeowner who hired Kendrick had not obtained a permit and that Kendrick did not have city licenses to perform the work.
The violations were particularly egregious because Kendrick was assigned to a task force that busts people for working without permits. He was further accused of asking investigators for city-owned parts — lead packs and copper — to repair the broken pipe.
Pat McDonough, one of the responding investigators, was "disgusted" by the board's reversal.
"They have people engaging in criminal activity who come back to work, then they go after and fire people who don't have political clout," McDonough said, describing himself.
"They destroy their lives, take away their pensions and force them to spend their pensions fighting to get their jobs back," he said. "It sends the wrong message to guys like us who put our lives on the line squealing on these guys. Why bother blowing the whistle or showing up in court?"
McDonough helped blow the whistle on the Hired Truck scandal, got fired in 2005 for allegedly violating the city's residency requirement and was hired back after a city hearing officer reversed his firing.
In between, there was explosive testimony at McDonough's hearing from a co-worker who claimed overtime was for sale at Water Management and that gambling was rampant on city time at city work sites.
In the final ruling, hearing officer Carl McCormick described a work site "akin to a hellish nightmare" where bribery and bullying reigned supreme. He said it was "difficult to envision a worksite more indecent."
The reversal of Kendrick's firing comes one week after an Office of Compliance survey showed Chicago employees report only half the incidents of misconduct they witness — compared to two-thirds in other cities –because they don't think anything will change or because they fear retaliation.
"It sends a horrible message to all city workers," McDonough said.
Mayor Daley needs to figure out people are broke and tired of corruption in Chicago. Thank you again to Fran Spieman, she has a bright light and uses it!!!