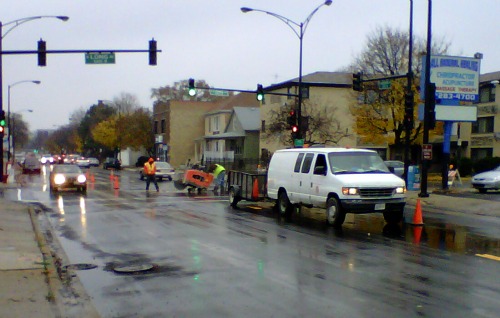 Someday, Daley will wake up on his deathbed and feel regret for shortchanging the black community out of a fair share of his bogus minority set asides. Almost all the construction in the City of Chicago seems to go towards Hispanic Companies. Daley and his personal police, the Office of the Inspector General never check if these workers are paid prevailing wage. Today at Long Street and Addison, this company was saw cutting. This company’s name was not on the permit. Rahm is running for mayor of Chicago because he has Obama to cover the criminal activities in Chicago. If the Office of the Inspector General allows Rahm to run for Office of the Mayor of Chicago and not challenge his residency, than we know this office is a joke. Rahm was not in Chicago for two years, had no residence and the OIG fired many people for less. Let’s see if the legal system in Chicago is just for rich white folks. Photo by Patrick McDonough.

Mayor Daley gives more work to Hispanic workers as Chicago Union Workers sit home and starve. Most people need to look at all the construction sites on Chicago streets. Almost every worker in the North side of the city is Hispanic. Where are the women? Not good enough Mayor Daley? Where are the blacks Mayor Daley? Not good enough? Construction jobs to people just speaking Spanish is out of control in Chicago. Go to the 5700 block of Lincoln in Chicago. See if what I say is true. Look at all these stories below. I am not against Hispanic folks, I am asking about a balance for all people. This is out of control in Chicago. Mayor Daley is out of his rocker. We need the FEDS to overlook all the minority cuts and no bid contracts. Do it now in case the Chicago economy gets worse. You will really have big problems than. Photo by Patrick McDonough