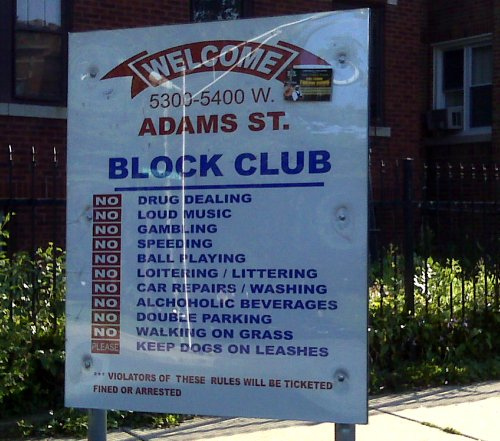 If you are a regular of Chicago’s South and Westside, the rules are posted clearly on behavior expected. Most block rules make it very simple and the postings are clear, No Drugs, No gang activity, etc. Well the Heard family made an “investment” in the heart of one of Chicago’s worst crime zones. Ms. Jacquelyn Heard is Mayor Daley’s spin doctor, spokeswomen, and Press Secretary. The timing could not be worse as Chicago Clout and a host of Chicago webmasters have made a full frontal assault on Mayor Daley’s corrupt administration. These actions are destroying Mayor Daley’s greatest dream of being on stage like Hitler during the 1936 Olympics. The story never addresses why a well paid person like Ms. Heard would purchase a building in the hood. See it is one or many reasons, let’s explore. Many landlords like properties in the ghetto because the government pays the rent. Mayor Daley has a corrupt building department that does not inspect these homes; some inspectors take bribes, look the other way, or are afraid to enter this type of neighborhood. My suspicion is simple, most renters in the ghetto pay cash rent. Cash rent can allow a person to have loot on hand to play the part in Daley’s administration. The IRS should look into the accounting of the income claimed on this property. I also think the Federal Government should look into any conflict of interest obtaining property when an official is in a high ranking government job. During the Hired Truck Scandal, illegally obtained cash was revealed for acquiring property in Federal court records. The lesson here is simple; Heard will be covered by Daley because she knows too much. Heard should be fired and use her pension to get her job back like any other city slob with no clout. No matter what happens, the apple does not fall far from the tree, Daley has corrupted not only his city, he has corrupted his staff. Read the directions on your block Ms. Heard, and a freebie from Patrick McDonough, do not go to your investment at night, your type does not belong there. The Heard family property is located at 5319 West Adams. Do you think it was a move to make her the replacement alderman? I hope this lady never speaks ill about another fellow city employee again. Send the Olympic IOC to that hood at night, Daley needs to help the poor. Photo by Patrick McDonough