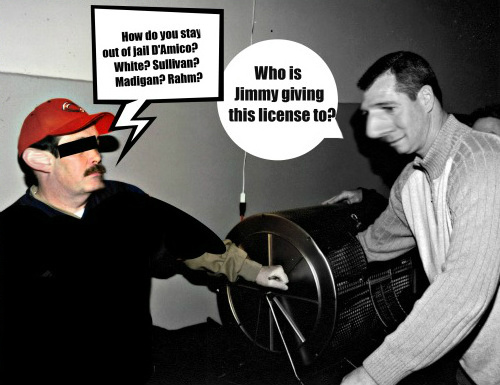 Chicago Plumber’s Local 130 needs a new Business Manager and they also need new business agents. The seniors are going to get a large reduction to the pension and everyone is keeping it mum until after the election. Retirees are asked to make sure they elect the same guys without realizing they are possibly in store for a major reduction in monthly payments. The progressive party is jokingly referred to the “unemployment party”. The existing management at the Chicago Plumber’s union needs a shakeup. There was no money for hats at the last St. Pat’s Day parade. Times are really bad. The only thing they got right was a St. Pat’s Queen that was Irish for a change. I think John D’Amico should be fired from the City of Chicago due to the fraud in obtaining a Plumber’s License, than James Sullivan should be thrown in jail. The Chicago’s Local 130 union made a major mistake in taking over other locals. Times were good and folks got greedy. The Chicago Unions need to get their act together before it is too late. John D’Amico needs to explain why he does not show up to work at the Jardine Plant. He has a nose for politics and pensions

The City of Chicago needs the convention business to not only promote our city, but to provide much needed income to support Mayor Daley and some of the leeches he employs. For over a decade money was flowing into Chicago and no one seemed to care about the waste. I complained about the top-heavy management and the lack of proper certifications to oversee Chicago’s departments. Mayor Daley loaded departments up with political hacks, clowns, and incompetent freaks. To get a promotion, you just needed to understand the political games, understand common sense was secondary, and work extra around the political season. Many of Daley hires are still milking the workman’s compensation claims despite the many inroads we have made for worker safety. The situation at the McCormick Place is paving the way to how Chicago is seen to the rest of the United States and the World, especially China. You cannot keep milking the convention business in Chicago anymore. Let’s review the factors that are sending convention business to other states and cities. The major players in the convention business are high rollers, wealthy, smart, and are business savvy. When they roll into Chicago, they wanted Meigs Field to handle their private planes. These are high class people that are not going to put up with the herds at O’Hare Field. They need to get in and out. Why waste your time on the Kennedy Expressway? The Chicago convention business is run by political hacks that think they are special and above the law. It is run by amateurs and immature morons, period. When businesses go to other cities, they are treated with kid gloves, entertained, wined and dined. When convention executives are in Chicago, they notice the citizens are ticketed and circled like vultures. The red light cameras, the array of high taxes and fees other cities do not experience are a detriment. Taxes for rental cars, taxies, hotels, dining, parking and travel never seem to end in Chicago. Companies attending conventions see no reason to relocate to Chicago. Businesses are like herds, they will continue move in packs away from Chicago. We need to offer some strong incentives to keep conventions in Chicago, hiring Mayor Daley’s friends and family is not the answer. Daley’s has family employed at McCormick Place. Unions such as Journeyman’s Plumbers Local 130 decide which workers work at the convention center instead of a proper application process which could provide better employees. Safeguard the conventioneers by giving management more power to enforce work rules. I think major conventions like the boat show and the car show will stay, but Daley needs to give them incentives like United Airlines tax breaks. I suggest all conventioneers threaten to boycott now for better contacts, Daley will cave in. As I said before and I will say again, keep your eyes open and expose corruption now, before it is too late. Switching subjects, I also hope the incident involving a laborer assaulted by a plumber yesterday at the Department of Water Management is not going to be covered up. I also hope the rise to power by Lemuel Austin from a Department of Water Management laborer to a superintendent’s position at Transportation is just a rumor. I know Daley is an idiot, but does he need another black eye to learn his lesson? Keep in touch; I have another gem on Daley’s son Patrick! Patrick McDonough.