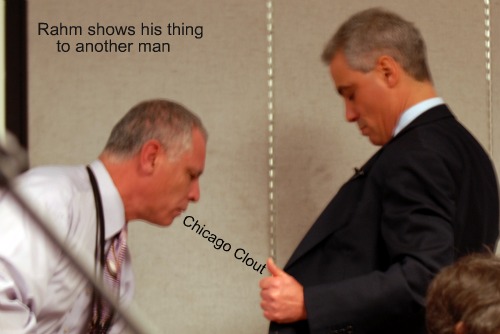 Do you really want Rahm Emanuel the next Mayor of Chicago? This photo is by Patrick McDonough.

We have a great T.V. Show on the objectors to Rahm Emanuel’s attempt to run for Mayor of Chicago. No matter what you think on the matter, most of Chicago’s taxpayers have no clue on what the law is and what the requirements are. The objectors will explain why they believe Rahm is not eligible to be on the ballot. The facts on the case were muddled and I think the Chicago media needs to get teeth on the residency laws and regulations. I have been asking for this for years, but I am not pals of the Chicago Political Elite. We have a well-known lawyer and a certified expert on residency law to put the pieces together. So bring an open mind and learn the story behind the story. I am also going to ask some big shots in the Chicago media if they would like first crack at this story. We at Chicago Clout are a support service to the big guns. Photo by Patrick McDonough. Rahm Emanuel was tired when I took this picture. When he was fresh in the morning, he does photograph well. The morning photos I took of Rahm were really great. Patrick McDonough Objector 007.

I must say Hearing Officer Joe Morris did a great job at the Rahm Emanuel Hearing yesterday and today. Freedom is something to Chicago Citizens and the Chicago Press. If you allow more meetings and citizens can participate, you will have a better country. Yes, the hearing officer has very Saintly Qualities. Photo by Patrick McDonough