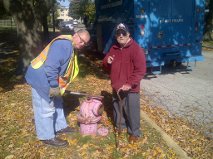 John Faleni is a 92 year old guy that worked for the City of Chicago as a Laborer. Most of his years were spent in the Central District on the Hydrant Truck. John really loved the newer trucks the department bought a few years ago. John remembered my father a plumber and then a Plumbing Inspector. John was so excited to see the current employees and had many fond memories about the 34 years he worked for Chicago taxpayers. John really got a kick out of the Hired Truck Scandal. John retired in 1983. I was happy for John and stopped losing count of all the times he shook my hand. John is pictured with Ronald Bober another 1092 Union Brother. John was concerned about the Chicago pension crisis. Photo by Patrick McDonough

One of the better State Representatives in Illinois is from the 33rd District, Luis Arroyo. Rep. Arroyo is very calm and unflappable. He has a good sense of humor and is currently working on his new offices. Yes, he has permits, thanks! Luis needed the water shut off and called his friends at the Department of Water Management. Patrick McDonough and Ronald Bober responded and made sure a leak crew would come to the rescue later that night. Rep. Arroyo did not ask for any extra special favors from the department. He asked me about his son, who is doing a great job with the teamsters at the Water Department. I told him his son works very hard and is a good example for fellow employees. We also talked about some employees that are “rough around the edges”. Luis Arroyo is doing a good job for the community and enjoyed his picture with Ronald Bober, a hard working member of Laborer’s Union. When great public servants want the Water Department’s best employees, they call for Truck 1308. Thank for the words of wisdom Rep. Luis Arroyo!!! Photo by Patrick McDonough