Mike “Packing Boy” Tierney has made himself almost inseparable at the Plumber’s Union and is tagging along with Tim Coyne, a candidate for Business Manager. I was just told Mike Tierney was following along like a lost puppy, trying to be helpful to Coyne. I do not understand why, but let’s look at possible motivations. After a complete failure at the City of Chicago, Mike Tierney was last at the O’Hare Airport. One might ask, after one investigation after another, Mike would just skip town. Mike Tierney moved up the ladder thanks to lots of packing. He started as a ditchdigger and a mailroom boy, but became a ranking supervisor at the City. Somewhere along the line, Mike obtained a Plumber’s License. He never spent a day as an Apprentice. Mike Tierney said under sworn oath that Caulkers are better than Plumbers. Mike was a Caulker. Mike made it through many scams at the Water Department directly under his thumb. Bribes for overtime, a heroin ring, Hired truck scandal, and a notebook computer confiscated by the OIG. Mike was part of tens of thousands of dollars accepted by people wanting to become judges in Chicago. It is one hell of a racket. Mike is part of a developing scandal illegally issuing Plumbing Licenses to his 36th ward pals. It is truly amazing how many times Mike walks away from lawsuits and major scams right under his nose. It does pay to know judges. After a full City pension under his belt and an easy Airport job, Mike is packing away to get a do nothing Union job. Mike likes wearing Union garb like he knows plumbing. Tim Coyne should learn the old adage his pal, James Sullivan will soon learn, sleep with dogs and wake up with fleas. How many pensions does Mike need and why? Why is he putting on the old “I am really concerned eyes”? I hope he stops ratting out his employees to cover his own azz. I hope he quits his scams and leaves a job to real honest to goodness plumber that knows the trade; guys that can do the plumbing in their own house. Watch this story unfold folks, it will be a whopper. 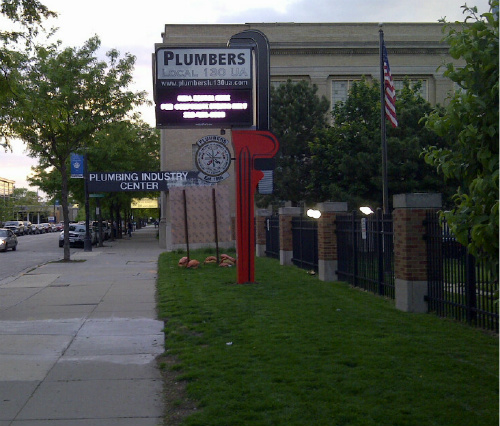 Much of the union political passage of power has been done behind closed doors for decades. Plumber’s Local 130 had a tradition of fine leadership; the members were last well served by Gerald M. Sullivan, a true powerhouse and man of distinction. Gerald was seceded by James Sullivan, a sneaky weasel if ever there was one. Many of the membership challenged Jim’s leadership, and then just walked away. I have never seen a greater amount of union trained member’s working for non-union companies until now. To stop this destruction of the union, age barred James Sullivan from further damage. Many union members were expecting business as usual with the anointing of Jim Coyne as Business Manager. If Jim was not challenged, the same ways of doing business at 1400 West Washington might continue. I met with the Integrity Team that is issuing an election against Tim Coyne. I really think this is more of a kick in the ass of the status quo, than an actual anti-Coyne sediment. Plumbers are very pissed off in Chicago. James allowed many unqualified folks to join the union, his school prepped unqualified candidates for the Plumber’s Exam. This lead to the termination of Dean Slawek, a former Chicago Water Department ditch digger. I also contacted Rahm Emanuel’s camp at City Hall, they assured me they are willing to work with the new management team assembled by Chicago Inspector John Swietczak. This is a great opportunity for Plumber’s Local 130 to change direction and get thing right for the membership. I confess I have never seen the members of Local 130 so agitated in front of the union hall tonight. The insider’s click better open their eyes and listen to the issues or they will be left with nothing. I also met some old friends I knew when I was a member, they are voicing the same issues I have but refuse to stop the insanity.
The two leaders and officers of both parties are going to face off May 24, 2012 at Can-Tv in Chicago live. I have invited members of the press and two Aldermen to attend and ask questions. Remember, if you do not show up, I will have a replacement for you. Photo by Patrick McDonough