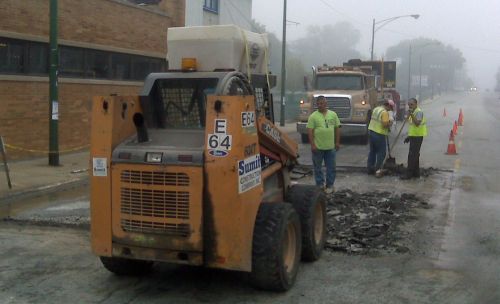 Many Chicago City workers are laid off and Mayor Daley made sure his goons from Skokie, Illinois were working on a Saturday morning. This crew was fixing some asphalt for Mayor Daley on Northwest Highway in Norwood Park (Chicago). Mayor Daley continues to privatize at a stunning rate thinking he will have more control over the work, patronage, and scams on the street. Mayor Daley Olympic dream will be dashed as he trying to put on a front for the world; the infrastructure crumbles everywhere in Chicago. I am an employee for the City of Chicago, licensed and certified, it would be a massive mistake to take on the Olympics. This is a typical handyman approach to repairs; you have a group of workers that are difficult to understand due to their heavy accent. If Daley wants to impress the world as to his insanity, go and watch a minor project on Milwaukee Avenue in Jefferson Park. This project has struggled on for years; gross mismanagement and incompetence are par for the course. Daley has the greatest problem of any Mayor attempting to get an Olympic bid, while on the surface the minority bidders, and women owned businesses seem like the right thing to do, the corruption and incompetence make even minor road and infrastructure repairs drag on and on. I watched these three men working for this company that popped up out of nowhere, somehow having access to millions of dollars of contracts and credit. These men seem nice enough, but should be supervised, have union credentials on, have a City of Chicago official present, or at least one of Mayor Daley consulting engineers present to verify the work. Also, the City of Chicago should verify these workers are making full scale and overtime on Saturdays. If this is the way Mayor Daley and his band of Goons want to run Chicago, at least protect the taxpayers, we need safeguards. I hope this winter when the first bunch of snowplows start destroying this work with a single pass, you remember you knew about it at Chicago Clout. Patching streets is a waste of money. I also want to tell all the businesses on Milwaukee Avenue, think twice when the politicians come around for money next election. I sick of the projects started and not finished in Chicago. Photo by Patrick McDonough