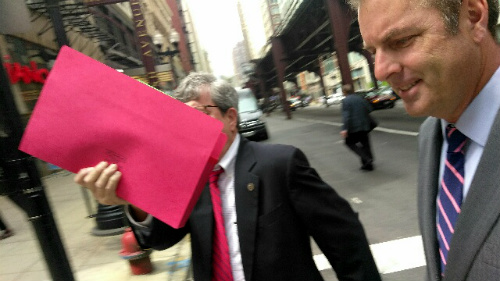 On Wednesday, June 20, 2018, many of the Illinois dirty crooks gathered to slice up the Illinois Workers’ Compensation pie for their own selfish use. Back in the old days, the crooks kept to themselves, sliced up the cash, and went on their way. The new breed of thieves is much worse and they steal from people with no way to defend themselves. Lawyers were a noble profession but the worst scum practice workers compensation. No doubt, Illinois workers’ compensation lawyers include some of the sleaziest dirtbags known to man.
The lawyers that practice workers compensation in Chicago includes lawyers part of the Workers’ Compensation Lawyers Association. Some of these lawyers cut deals that are not in their client’s best interest. Some of these lawyers refuse to file paperwork to reinstate benefits, promise the moon to get the business, and then sit on the case starving their clients. As soon as some of these lawyers get the signature from the injured worker, they feel like their job is done. They wait until a client is starved and then willing to take a cheap settlement far below value. The lawyers are willing to sign off on scam lawsuit loans because they get a client off their back for a long time. Some of these loans are 36-39 percent annual percentage rate loans compounded every six months. What kind of a shit lawyer would encourage a client to take these loans? By the time the client gets a settlement, nothing is left. Some lawyers get a percentage of the proceeds of the loans, mainly in Chicago. If you attempt to obtain a new lawyer, the commission lists the prior lawyer name so they can contol the case from start to finish. It is all about the final cut.
One of the last meetings was an Appellate Court Luncheon. People could ask Justices questions about current trends in workers compensation. The lawyers at the University Club enjoyed a nice meal provided by contractors that make millions screwing injured workers and provided fraudulent medical reports that are so false as to be a joke. The lawyers on hand were asking silly questions to gain favor from the Justices. It was embarrassing.
The State of Illinois Workers’ Compensation Commission staff, Arbitrators, and Commissioner enjoyed a $100.00-dollar freebee. It is a major embarrassment, these staff members are rubbing elbows, talking about cases, sharing envelopes, vacation homes with the same people that they are policing. That is like the prisoners sharing the jail with the wardens. Government employees responsible for protecting injured workers are violating the open meetings act. These Government employees should not be in a meeting that cannot be enjoyed by the public.
Governor Rauner has made a joke of the workers’ compensation commission. One IWCC workers joked, “the niggers ruined a good thing”. “remove their people cases and the system will work again”. Almost every case heard by the Chicago Illinois Workers Compensation Commission is fixed. Some lawyers are not held accountable for being unprepared. Many lawyers collude with other lawyers to fix cases and make fees at the end of the case. Some lawyers go to court ill prepared with no medical records. Now, the IWCC is so screwed up, injured workers have no idea when their cases will be heard. The online notification system is so lacking lawyers lie to their clients on when hearings occur. This is not a mistake, the Arbitrators do not want injured workers around, so they will see how messy the IWCC is run.
The fix is in and the injured workers suffer. You can run, but you cannot hide.