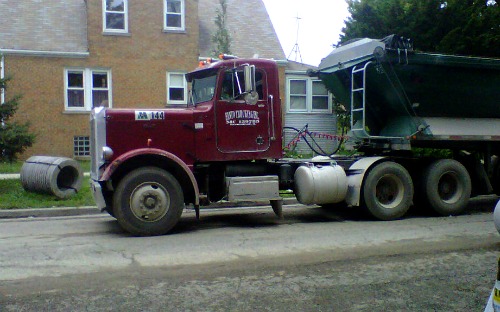 Rich Daley left the Office of Mayor in Chicago like a sick dog. Chicago is a town falling apart at its seams. I guess twenty years of theft; scumbag inside deals will destroy anything. Rahm the reformer took the keys to Mayor Daley’s Hired Truck Program and got her up and running. Rahm will need millions for Barack Obama’s re-election and no better place to get it than the Hired Trucks. Two City of Chicago Department of Water Management trucks idled at the corner of Warwick and Lamon while two Hired Trucks took loads from Union Local 150 Hoisting Engineers on September 19, 2011. For years, Hoisting Engineers put spoil on Hired Trucks while their Union Local 700 Teamsters starved at home. So if you are a Union Local 700 teamster sitting at home, make a stop to the goons’ headquarters in Park Ridge. Ask these goons to attempt to get up and go over to Chicago Construction Sewer sites and get your job back. It is a shame the misuse of minority programs and minority companies. I wish these trucks would haul all the crap out of City Hall starting with Rahm “Ditto” Emanuel. Photo by Patrick McDonough.

The order is complete for the 48Th Ward Aldermanic Candidate list. I was happy to find a total of five candidates. In order of registration these are the following names, Patrick McDonough, Harry Osterman, Steven Cheraska, Jose E. Arteaga, and Philip Bernstein. I was in line at about 4 something and had ticket number 33 the first day of filing petitions. Remember that could change on December 1, 2010. I admit I was waiting for Philip to get on the ballot and I saw his name the last day, what a relief. Philip is going to improve the quality of the debates in the wards. Today, I called Philip and re-invited him over to my place and film a half an hour so people can get to know him better. Philip accepted. Philip is going to ask Michael Volpe again to host. Michael Volpe asked Harry, but Harry has intermediaries and will not return phone calls. I also want to invite Steven and Jose over for a free photo shoot and a half hour video to assist their campaign. The 48Th ward needs change and some debate on the issues a.s.a.p. I had a wonderful one plus hour at Columbia College and videotaped the event. I will post it soon. I spoke to the class on issues facing the City of Chicago and the 48Th Ward. I hope a stooge from the 48Th insiders do not challenge the candidates again, this is an insult to all of us. Let the debates begin, Patrick McDonough.