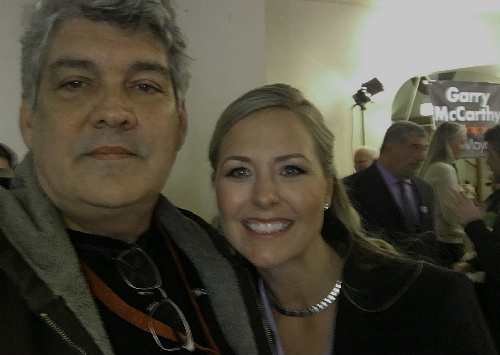 Garry McCarthy has a secret weapon against Mayor Rahm Emanuel. Kristin Barnette McCarthy. You can not run for mayor in Chicago unless you have a wonderful, brilliant, successful lady to make you stand out. Chicago’s next mayor is going to be Garry McCarthy. Kristin has a very wonderful personality and really made me feel important. She has been a great supporter to Garry McCarthy when times were tough. Being the wife of a famous Superintendent of Police is no easy task. That job means taking the pressure cooker to an all new level. Tonight, I went to the Garry McCarthy for Mayor fundraiser and found a great diversity in the crowd. I was expecting a bunch of clean cut off duty cops. Blacks, Hispanics, tons of Irish, and many Union members from the trades. Rahm might need Alderman Burke to double his effort shaking down City Contractors for money on Monday. Game on!!! Thank you, Kristin. God Speed.