<![CDATA[<img alt="City Hall protest April 21, 2011 final.jpg" width="500" height="375" style="" data-src="https://www.chicagoclout.com/City%20Hall%20protest%20April%2021%2C%202011%20final.jpg" class="mt-image-none lazyload" src="data:image/gif;base64,R0lGODlhAQABAAAAACH5BAEKAAEALAAAAAABAAEAAAICTAEAOw==" /> A couple of hundred protesters were fighting for clean air at Chicago City Hall today. Many folks that read Chicago Clout understand I have brought this issue to the press for years. I have posted many pictures of the coal fired power plants located in the Chicago Southside. I was hoping Mr. Del Valle would become Mayor of Chicago and have a real friend on this issue. I want you folks to understand, the Daley family and the rich powerful interests control the air pollutions. The Daley family is on corporate boards that can clean the air. I consider the positions so companies can legally bride positions. I want all you parents with their kids squirming on those dirty non-union maintained floors on the second floor of city hall, nothing will be done except some lip service. The air in Chicago will only get better when you vote new folks into office, one trick pony Harry Osterman was a no-show. I am happy folks are involved in making the world a better place, better you better make changes, and throw the bums out! Chicago Clean Power Ordinance is a start. Keep up the good work Alderman Moore of the 50Th Ward. Picture taken by Patrick McDonough. ]]> END_OF_DOCUMENT_TOKEN_TO_BE_REPLACED

I hope everyone in Chicago took the time to reflect on all the great work Martin Luther King did to make America better. The City of Chicago must wake up and make sure all black folks get a fair and equal chance at contracts, promotions, and a better life. Mayor Daley has shortchanged the black community for over a decade. Lets make this wrong, right. Patrick McDonough, Executive Producer of Chicago Clout, Chicago Clout Website and TV.

Chicago Clout is inviting Ms. Lewinsky on an all expense paid trip to Chicago this January to help "get it out" for Rahm Emanuel. We will update you soon. 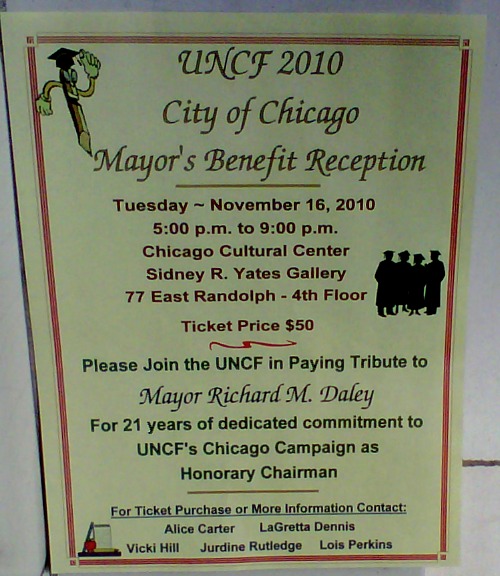 Mayor Daley was very lucky a year ago not to get his tail end in hot water misusing his position to advance causes using the taxpayer’s money. Fran Spielman caught Mayor Daley promoting the United Negro College Fund using Chicago City Workers. The problem is simple; City workers are paid to complete work with-in their job description. If you know these workers, they should produce a work product that that is directly related to their department. Taxpayers do not all agree Mayor Daley should steal employees to produce money for his pet causes so he can sit around and get a pat on the back. I am concerned because the Chicago Office of the Inspector General has again allowed this type of fraud to continue. I hope all of these employees are fired for fraud. I hope all the employees placing these posters around on city sites are fired. Just a couple of months ago, several employees were collecting cash with no receipts for this same cause. Ironically, Charles Rangel of the U.S. Congress was using his position to collect funds to promote causes for black folks in his backyard and he is in trouble. I guess you need to be white like Mayor Daley and nothing will happen. I hope Obama helps a brother out. Photo by Patrick McDonough 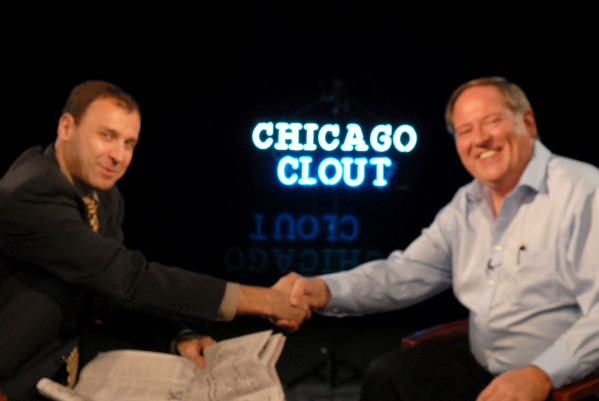 Enjoy this picture the video will soon be posted. Fredrick K White is asked why he is after Rich Daley’s job of Mayor of Chicago. The 2011 election will be fun.

<![CDATA[<img alt="Mayor Daley 2011 official picture" width="221" height="228" style="float: left; margin: 0 20px 20px 0;" data-src="https://www.chicagoclout.com/Daley%202011.jpg" class="mt-image-left lazyload" src="data:image/gif;base64,R0lGODlhAQABAAAAACH5BAEKAAEALAAAAAABAAEAAAICTAEAOw==" /> Mayor Daley and his goons have one powerful weapon that controls the elections in Chicago. Contracts. Mayor Daley and his family prospered despite the boom and bust cycles of the economy. The FEDS never took the time to take apart the miracle minority fortunes made almost overnight. The Office of the Inspector General never made any connections to the upper Daley family confidents that decide who gets what and when. When a minority company is blessed by Daley, they show up all over the State, County, and City. The Chicago Unions keep away and workers are paid well below prevailing wage. The insiders have their flavor of the day, when the ice-cream melts so do the contracts. John Kass wrote a great article about Morales, it is below for your entertainment. Morales rests in jail and no reporter asked Daley what he knew; they did not want to offend Daley. No reporter asked Daley if his administration launched an investigation into the City officials that had contact with Marco. I guess they do not want to offend Dick Tator. Patrick McDonough.]]> END_OF_DOCUMENT_TOKEN_TO_BE_REPLACED 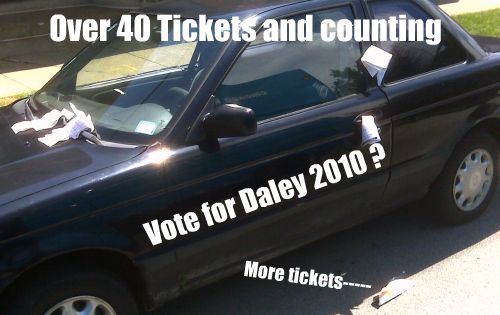 Another losing day for Chicago unions. Walmart brought the buses right onto the north side of Chicago City Hall. They loaded and rested between the James Thompson Building and the Daley City Hall. Mayor Daley rolled out the carpet after the Walmart meeting the FBI missed and the deal was cut. I saw Dennis Gannon today after the deal was agreed and for the second time in a while, Dennis looked very drawn. Daley had his armed goons parked on LaSalle and the deal was done. I have been very tough on Dennis Gannon for quite some time, but I can understand when the battle takes its toll. I admit I have been very tough on Chicago labor, but they have folded and left their worker’s cupboards bare. I also saw Robert Ryan, today and again he was friendly. Robert Ryan at Chicago City Hall today spells a sellout for workers every time. Chicago labor knew for quite some time they should have retired and let the new warriors take rein. Their greed is the downfall of every working man in Chicago. It always was about them and I know Daley will get large concessions on upcoming labor contracts. “A million dollars is a lot of work” Dennis Gannon told me today. I was going to remind him the meter deal was a lot of money also. Dennis has done much for Chicago Labor, but he should have left when the getting was good. The old fools are going down with the ship. As much as I hate to admit, Daley won, China won, Chicago taxpayers lost, Union labor lost. Walmart will feast on the taxpayer money with link cards and the unemployment level will increase. With Daley it is about power, not making good deals. Photo by Patrick McDonough.