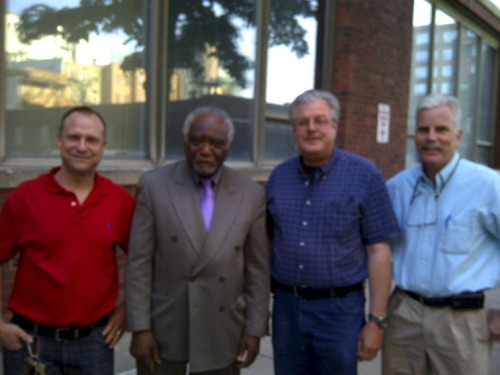 The Integrity team consists of three Plumber’s Local 130 candidates that want to be your next officers. What is Integrity? 1. Adherence to moral and ethical principles; soundness of moral character; honesty.
2. the state of being whole, entire, or undiminished: to preserve the integrity of the empire.
3. a sound, unimpaired, or perfect condition: the integrity of a ship’s hull.
4. Something the current Business Manager of Local 130 does not understand.
Many members of Journeyman Plumber’s Local 130 need a credible team to fix the current of cloudy water that has set record levels of un-employment at the Union. Time to put membership back to work at any cost. Explosive revelations have undermined the future of Plumber’s Local 130. I hope you enjoy this picture of John Swietczak, Michael McGann, and Michael Schmidt with Rep. Danny Davis. Additional meetings with Governor Quinn, Rahm Emanuel, Chicago Alderman, and black leadership continue for the next few weeks. Many leaders in State, Local, and municipal government are very interested in what is being brought to the table. Photo by Patrick McDonough. P.S. Gavin of the Plumber’s Union was again invited to debate the issues live at CAN-TV in Chicago in ten days. See ya there.