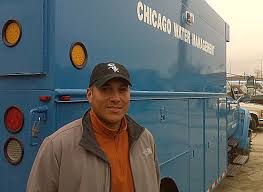 False inspections, steering investigations is par for the course. Are you surprised that Mayor Rahm Emanuel reappointed him? There is a reason, he is a puppet. A fool.

Last week and the week before, September 11, 2017 and the week of September 18, 2017, consisted of several interviews of North District foreman. Everyone knows except Joe Ferguson, the clown prince Inspector General, the promotion interviews, job interviews, discipline, job assignments, promotional tests were completely rigged under the past Department of Water Management leadership. If you remember, I spoke to the Federal Judge that released the Department of Water Management from Shakman oversight, and warned them about the very DOWM that were just front-page news.
Now a day late and a dollar short, Joe Ferguson, is considering the way the truck driver foreman was handing out overtime, the way the vehicles were used for personal use, used for lunch breaks, and other more sinister use.

Some water department employees sat around the yard all day, except for lunch and personal business. one of the most famous was North District Driver and Cook County Commissioner Luis Arroyo Jr. Luis was very quiet and never said a word, but he was a full-blown loafer at the North District yard. Joe Ferguson covered for him like a diaper.

Many of the emails Paul Hansen sent were not reported by many North District Employees. Joe Ferguson is allowing many North District employees to dilly dally until retirement and allow Plumbers’ Local 130 to drag this mess on as long as possible. According to a source, MT of Plumbers Local 130 told workers they will be fired and there is nothing he can do to save their jobs. MT was no racist, all he wanted was bribes, and he loved eating peaches in the morning.

Anyone that received nasty emails from Paul Hansen should be fired on the spot. No exceptions. Rahm Emanuel’s staff Sargent reported to me he is in full money raising mode, so he better clean this mess up quick. Elections are around the corner. More information on the way.