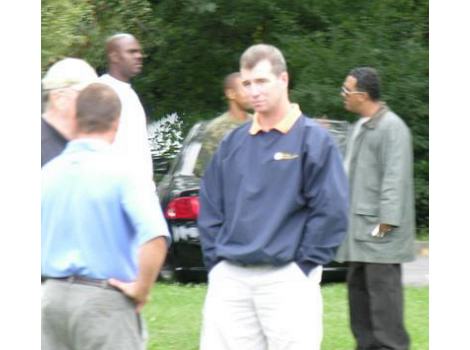 On December 8, 2006, Tim Novak and Art Golab wrote an article that is a must read for Hired Truck Scandal fans. Click here: http://www.suntimes.com/news/elections/165021,CST-NWS-daley08.article When I was “Deep Water”, the secret source of Mark Brown and the Sun-Times informant on Hired Truck, I had many conversations with Sal Rontondo in the North District Yard. Sal Rontondo told me how he put his company’s name in is Daughter’s name just to keep getting business with the City of Chicago. He was also well aware of the companies that were getting an expanded share of the Trucking Business. I am surprised the FEDs still have not uncovered the Alderman Margaret Laurino, North District District Foreman Anthony “Tony” Laurino, and the recipient of Clout Promotions John D’Amico. John D’Amico is a Illinois State Representative, and Full time employee of the Chicago Department of Water Management. Part of John D’Amico duties is to process utility hits and hand out cameras for crews. John D’Amico is hidden in the Jardine Plant and has high profile clout and connections. John benefited from his political linage as did Paul Hansen. As far as I am concerned the promotions for these positions that I also attempted for were stone cold rigged. I still believe the promotions to District Foreman were a result of long timers scurrying out the door as the FEDs investigations continued to heat up. Rontondo was part of the 39th Ward bunch that ruled the North District Water Department with Levar, Banks and the other competing Alderman. I still wonder why D’Amico, the boss of the crew that got busted with the Hired Truck Scandal never got any discipline for his involvement and supervision. There is two sets of rules in discipline in the Water Department. Last but not least, if you review the campaign donations of John D’Amico, and the money returned, you should be able to figure out the whole Hired Truck North District deal. Also read, click here: http://www.ipsn.org/characters/damico/damicos_lineage_cuts_both_ways.htm Photo by Patrick McDonough.