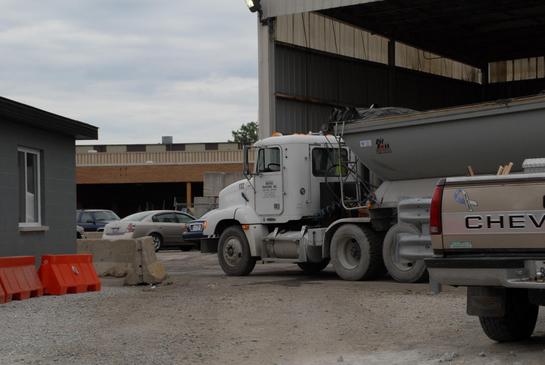 On June 22, 2007, hired trucks were seen in the City of Chicago Department of Water Management Transfer Station. Mayor Daley swore the Hired Trucks would stop rolling as the Feds swarmed into Chicago’s City Hall. I was alerted by Chicago Teamsters that used to move the old dirt (spoil) to the dump site. The Chicago Department of Water Management purchased many new (Scows) semi-trucks to move this waste. They Chicago Semi-trucks are sitting idle while taxpayers pick up the tab again. The company pictured is Matias Trucking. Matias Trucking is owned by Libardo Lizarazo a owner of a MBE and DBE business. When you think of a Minority Owned Business doing trucking, you might imagine a company with a few trucks, Matias has about 50 trucks. What is the big deal? Matias Trucking is taking work away from Chicago City Workers that are required to live in Chicago. Matias is located in the suburbs. This trucking company knows the game of giving to key politicians in Chicago, Dick Mell, Cynthia Soto, Cook County Commissioner Roberto Maldonado, Rod Blagojevich, and of course our hero, Senator Tony “2-6” Munoz. Matias also gave to the T.L.C. Finance Committee. A few thousand dollars in contributions will go a long way in Illinois and Chicago Politics. I wonder what Alderman Laurino must think, it seems she did not get a piece of this Hired Truck Action. Please learn a little more about the about Matias’s Union Local 731, click here: http://www.socialistworker.org/2003-2/471/471_11_Garbage.shtml One Chicago City Worker told me the Matias might be tied to Michael A. Tadin since the name “MAT”ias. Is it possible? Well things never change in Chicago under Mayor Daley, just a different dress on the same old mobsters. Do not forget Senator Munoz’s tickets (Ohhh Brother) are for sale at your local Chicago Water Department. Photo by Patrick McDonough.