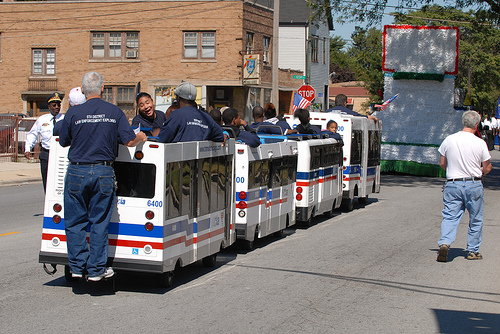 Mayor Daley was a proud passenger on these new “Green” CTA buses. Daley said they are very roomy and solves all the looming problems Daley has caused by spending Chicago Mass Transportation money on consulting and phony contracts. Do not worry about pollution on these new fancy buses. If you spit, hang your head over the bus and spit on the street. If you like eating nuts, throw the shells over the side. The new CTA buses will be easy to clean. It is very cold on these buses during winter, but they are very fuel efficient. Mayor Daley is very short and told everyone this is as roomy as his big gas guzzling Lincoln. Are you glad you voted for Mayor “Lil Richard” and John Daley? Photo by Patrick McDonough.