Please watch this video closely, click here: http://www.wttw.com/main.taf?p=28,7,19,15 Please note you might need to download some software to see this. This was Frank Avila at his best, fighting for the downtrodden. Also if you look close when Leroy Orange was speaking, you will see “Chicago Clout’s Mayor Daley” in the background. New rules Mayor Daley, Chicago Clout is everywhere. If you wish to wear the “Mayor Daley” prison uniform and mask for political events, please contact me.

<![CDATA[<img alt="Daley's Boyz.jpg" width="400" height="282" data-src="https://www.chicagoclout.com/weblog/archives/Daley%27s%20Boyz.jpg" class="lazyload" src="data:image/gif;base64,R0lGODlhAQABAAAAACH5BAEKAAEALAAAAAABAAEAAAICTAEAOw==" /> If this does not get a Federal Indictment Chicago Clout fans, I suggest you get into Chicago’s contracting system and start robbing the Chicago Taxpayers blind, just the Daley family. My fellow Chicagoans, you want a big fancy townhouse, you want a Michigan Summerhouse, you want limos and bodyguards, just get in there and steal em blind. Why suffer any longer living check to check? Why live a moral life? Chicago is the right kid of town to make millions, just give your cut to the Daley family. Excellent article by Fran Spielman of the Chicago Sun-Times. Photo edited by Patrick McDonough]]> END_OF_DOCUMENT_TOKEN_TO_BE_REPLACED

WATCH THIS VIDEO: CLICK HERE: http://video.google.com/videoplay?docid=4694254906291173648 Frank Avila Jr., Johnny Ruiz, and Bruce Randazzo try to explain the political dark-side working for the City of Chicago. Johnny Ruiz has been accused of Sexual Harassment by a co-worker at the Chicago Department of Streets and Sanitation. He will be fired soon. Bruce Randazzo made some serious accusations as to the lack of the respect for the health and safety for Chicago’s Citizens. In a pre-production conference, Johnny Ruiz made some major fraud allegations, I am hoping Frank Avila, Jr. will represent Johnny Ruiz. Photo by Patrick McDonough.

I am very proud of my son Patrick McDonough, he was on the front page of a major suburban newspaper. Patrick has always donated much of his time to make his community a much better place. He has never charged a penny for his services. Patrick was wearing a Chicago Plumbing Council hat. Nice job Patrick McDonough.

<![CDATA[<img alt="Patrick Daley's Investment with Robert Vanecko.jpg" width="500" height="334" data-src="https://www.chicagoclout.com/weblog/archives/Patrick%20Daley%27s%20Investment%20with%20Robert%20Vanecko.jpg" class="lazyload" src="data:image/gif;base64,R0lGODlhAQABAAAAACH5BAEKAAEALAAAAAABAAEAAAICTAEAOw==" /> Please make sure you get the inside story from Mark Brown. In the last decade, Mayor Daley and Chicago’s organized crime boyz have destroyed the taxpayer’s trust. This is a Hired Truck Scandal story. Mayor Daley and his family have profited handsomely on the taxpayer’s dime. I have complained since 2001 about the non-union companies scamming taxpayers. Patrick Daley, son of Mayor “Sgt. Schultz” Daley, has made millions for family scumbags like Robert Vanecko. Chicago’s Department of Water Management is in the thick of this scandal again, we know about the “private sewer inspection” companies. We know about the blank checks from Amalgamated Bank Chicago Bigwigs. Photo by Patrick McDonough]]> END_OF_DOCUMENT_TOKEN_TO_BE_REPLACED 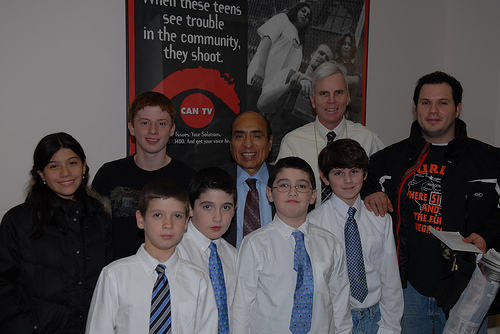 CLICK HERE TO WATCH: http://video.google.com/videoplay?docid=1105947239759036507 Please enjoy this picture of some of the people that helped with this new idea by Patrick McDonough. I first went to Sherry Avila and she managed to get Commissioner Frank Avila of the Metropolitan Water Reclamation District of Cook County to host. Since this was our first show, we had a few glitches and they were very minor all things considered. Three of my sons, Patrick, David, and Michael McDonough starred. John “Jack” McGann also starred with Zack Napier and Destiny Trujillo. Writing was by Patrick McDonough IV and Michael McGann, a famous Plumbing Inspector that works for the Chicago Department of Water Management. Michael McGann also agreed to assist future shows that might require more technical expertise. Sherry Avila wore many shoes including awesome graphics, and Tony Joyce assisted with the control board. We also had staff in the control room. This show was produced by Patrick McDonough, I am very proud of this show. Pictured above with Commissioner Avila is Patrick, David, and Michael McDonough. Michael McGann and his son, John “Jack” McGann, Destiny Trujillo, and Zack Napier. The name of the Show is “Commissioner Frank Avila Speaks…with Kids about the Water Environment”. Photo by Patrick McDonough

If you remember, Mark Brown did an article on me, and I promised to keep fighting. Again, we must review every contract at the Chicago Department of Water Management. Every senior employee of the Department of Water Management must be investigated. The employees that have businesses that subcontract to these front companies will be exposed. When will the Citizens finally realize the corruption between the unions, the Daley family, and the mob. How about that Tire company on Pershing Mayor Daley, we know about that deal also. Click here for this great story: http://www.suntimes.com/news/metro/696638,daley121407.article Patrick Daley is at it again on the taxpayers dime. And you wonder why Patrick Daley joined the Army? Patrick McDonough.

Christopher Kelly is now under the dragnet of Patrick Fitzgerald. This is the greatest thing that almost gets us to where we need to be. Mr. Kelly should provide some interesting information on his contracts at the Chicago O'Hare Airport, the Chicago Water Department, now called the Chicago Department of Water Management, and on and on we go. Lets make some time for McDonough and Associates and Chicago Water Partners while we snoop around. Patrick McDonough.