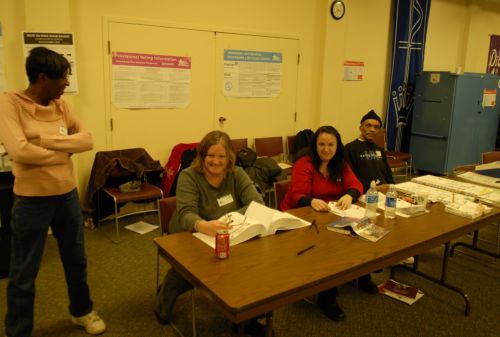 These are my election Judges in the 48th Ward. They were all very nice and made sure everything was on the up and up. Chicago needs to make sure every vote counts. I hope you voted. Photo by Patrick McDonough 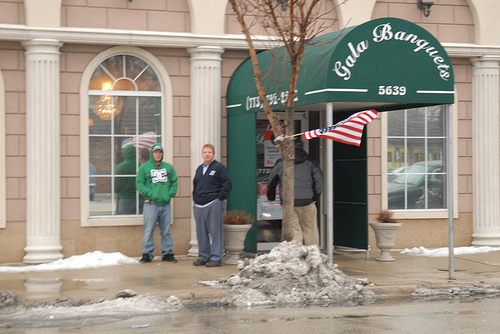 Guys, stand one hundred feet away, you know, by the Massage Parlor.
The Chicago Board of Elections needs to tell everyone, including the Polling Place at 5639 North Milwaukee, to leave people alone when they vote. P.S. when I reported this to the Chicago Election Judge, he got out and made sure the guys were gone. Chicago needs to clean up the elections. Photo by Patrick McDonough

Handing out literature and/or political activity is not allowed within 100 foot of a polling site. Alderman Patrick “Phat” Levar should take a second look at these massage parlors. Remember Pat “Phat” Levar’s promised to clean up the blight of massage parlors on Milwaukee Avenue in Chicago’s 45th Ward. I was happy to see an improvement in the Laurino polling places, especially the one on Elston Avenue. I love this Board of Election cone. I wish someone would ask Mayor Daley his opinion on Chicago Massage Parlors. Photo by Patrick McDonough.]]> END_OF_DOCUMENT_TOKEN_TO_BE_REPLACED

In a conflict of interest, two Chicago City Workers, were installing plumbing and carpentry at 5969 West Superior today. Work was in progress at 3:45 p.m. Chicago's best and only Inspector General asked the Plumber and the Laborer employed by the Department of Water Management Central District, why were they doing a side job? The Inspector looked for the permit and could not find one. I am concerned when the Plumber said to me, "What are you doing here?". "You must live in Oak Park, right over there", said the Plumber. Just when you thought the North District boyz did all the side jobs, this pops up. What was I doing in Oak Park today? Patrick McDonough.

Read an excellent article by Fran Spielman of the Chicago Sun-Times.
Daley hiring chief quits
February 1, 2008
BY FRAN SPIELMAN City Hall Reporter
The top mayoral aide charged with implementing a city hiring system free of politics is leaving her $147,156-a-year job — six weeks after a federal hiring monitor accused the city of regressing in its efforts.
Jacqueline King has decided to return to her old job as head of Graphics and Reproduction. Underlings welcomed her departure. City Hall sources said they had chafed under her autocratic management style.
Jacqueline King in 2006.
King ordered 50 employees to reapply for their old jobs — or risk being fired — in a reorganization tied to the switch to computerized scoring and screening of job applicants. Employees told the Chicago Sun-Times they felt "stunned and betrayed" after learning of their fate on the Internet site Craigslist.
"Without a doubt, she was a tough manager. There are people who don't like that. There are a lot of people who disagree with her management style and they'd like you to believe she was run out of there," said mayoral press secretary Jacquelyn Heard.
"I can tell you unequivocally she was not asked or forced to leave. This is her decision. She's tired of doing what she's been doing and she wants to go back to Graphics."
King could not be reached for comment. Heard denied that the change was tied to the monitor's report–or that it was a setback in the city's efforts to move beyond the city hiring scandal.
"If you read the monitor's last report, it had nothing bad to say about Jacky King," she said.
Federal monitor Noelle Brennan could not be reached for comment.
In her year-end report, Brennan accused the city of slipping backward — not with the "wholesale overt manipulation of interviews" on display during the federal corruption trial that culminated in the conviction of former patronage chief Robert Sorich, but with "other, more subtle types of manipulation of the hiring process."
Brennan said the alleged violations she uncovered in response to 685 complaints ran the gamut — from "hundreds" of city employees illegally "acting up" in higher-paid, temporary positions to the city's failure to "meaningfully enforce consequences for non-compliance."
The monitor branded as "an area of significant concern" Daley's failure to discipline current city employees "directly implicated in Shakman violations" during testimony at the Sorich trial.
"The city's ongoing failure to effectively monitor compliance with the reformed policy, coupled with the failure to take any disciplinary action when violations occur, is certain to result in on-going violations," she wrote.
A few weeks later, the federal judge who appointed Brennan agreed to let the Daley-created Office of Compliance oversee city hiring after Brennan's departure, instead of Inspector General David Hoffman.
But U.S. District Judge Wayne Andersen included two major safeguards: that the hiring czar not be a current or former city employee and have no ties to Chicago politics, and that the city maintain a log to keep track of the times when the mayor's office or politicians lobby department heads for jobs.
The city has agreed to create a $12 million fund to compensate victims of the city's rigged hiring system.
Well written Fran Spielman, Patrick McDonough