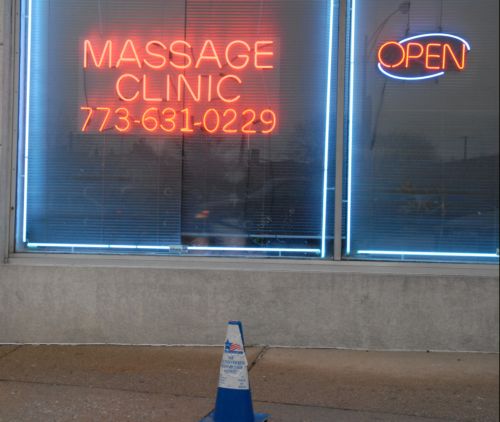 Handing out literature and/or political activity is not allowed within 100 foot of a polling site. Alderman Patrick “Phat” Levar should take a second look at these massage parlors. Remember Pat “Phat” Levar’s promised to clean up the blight of massage parlors on Milwaukee Avenue in Chicago’s 45th Ward. I was happy to see an improvement in the Laurino polling places, especially the one on Elston Avenue. I love this Board of Election cone. I wish someone would ask Mayor Daley his opinion on Chicago Massage Parlors. Photo by Patrick McDonough.]]>City Closes Prostitution Loopholes
(February 7, 2007) The Chicago City Council today adopted an ordinance introduced by Ald. Patrick Levar (45th) that strengthens the Municipal Code making it harder for massage parlor establishments to act as "fronts" for prostitution, money laundering and human trafficking.
Among the changes, the ordinance requires massage establishment owners to maintain business records, which include customer names and addresses, and have them available for inspection. It requires owners to maintain on site copies of any therapist's state license and state-issued photo identification. Non-licensed personnel are prohibited from being in a massage room with a customer unless a licensed therapist is present.
"For too long illicit massage parlor owners have flaunted the law with loopholes and spread blight over decent neighborhoods in the City of Chicago," said Ald. Levar. "This ordinance will close loopholes, help to rid our communities of illicit massage parlors and protect property values."
A massage establishment owner is held strictly liable by the ordinance for violations committed by any employee or independent contractor. When a massage establishment license is revoked for cause, the ordinance allows the city to revoke the massage license of any other premises in the city owned by the licensee.
The ordinance was introduced by Ald. Levar after having to work months before successfully closing the VIP Salon and Spa, 4422 N. Milwaukee Ave., in his ward despite numerous prostitution arrests and pending court cases.
"We are firm believers in due process, but more than two dozen continuances in a little over a year attempt to make a mockery of our court system," said Ald. Levar about the city's battle with defense attorneys for the massage parlor.
Ald. Levar was first elected to represent the 45th Ward on the city's northwest side in 1987. He is chairman of the Chicago City Council Committee on Aviation.

6 Replies to “Vote in Chicago, Get a Massage, and Go Home”