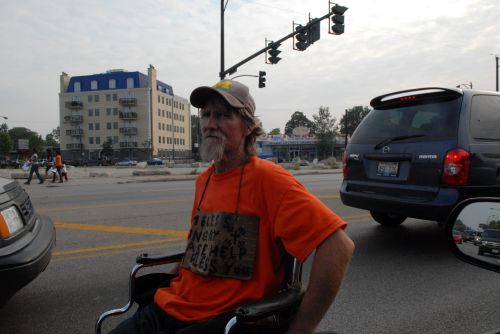 Democrats have always stood to help the little guy in Chicago. We join unions and hope to get ahead with hard work. Many people get left behind as the political forces are corrupted by gambling, corruption and criminal enterprise. I think all Chicago city employees should undergo drug testing. I mean, all employees including the Mayor and Aldermen. Mayor Daley should help employees with gambling problems. If you look at the picture you will see nice condos and vacant lots, an eyesore even in this nicer section of Chicago. This picture was taken at 3100 West Peterson; the man pictured has fallen on bad luck and begs in a wheelchair. You would think in Chicago we address these issues making sure there are jobs that pay with some self-respect. Obama made his self rather rich in a short amount of time and McCain forgets how many houses he owns. Corruption in Chicago sucks the life out of the poor and we watch those in power vacation and travel the globe. Ms. Obama made over $300,000.00 a year screwing the poor. Life is good at the top in Chicago; ask this guy what it is like beg? Let’s fix Chicago, let us forget the Olympics, vacations, partying and, vice. Photo by Patrick McDonough.

9 Replies to “People Beg in the streets of Chicago, Homeless ranks swell”