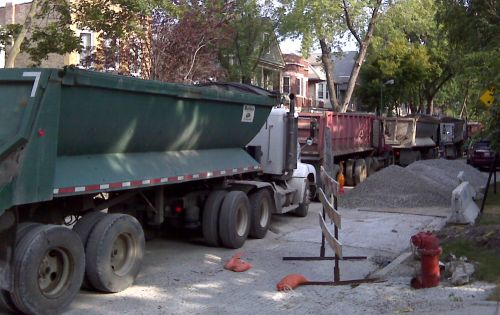 Mayor Daley is ordering City of Chicago Teamsters drug testing on a record pace. The other union workers can relax because the weenie has set his sights on the lowest paid of all the trade workers. This picture shows a large line of Mayor Daley’s special companies that know the pay to play schemes Daley made famous. This picture was taken at Oakley Street just south of Irving Park. It seems the shrimp has the habit of hating when baby richy do not get his way, a midget’s curse. We need to support the drivers that lost their job by attending Wright College, Thursday August 13, 2009. 5:00 p.m. Please bring any extra canned food you have at your house for our union brothers that lost their job. Also bring some rotten fruit to throw at Pat Ryan and all the phony lying scum buckets selling the 2016 Olympics so Daley can parade his scary face in front of the world. Chicago Clout is against the debt the 2016 Olympics guarentee until Daley can tell the truth for once in his life. Chicago is broke now, Dump Daley and the Olympics. Photo by Patrick McDonough.