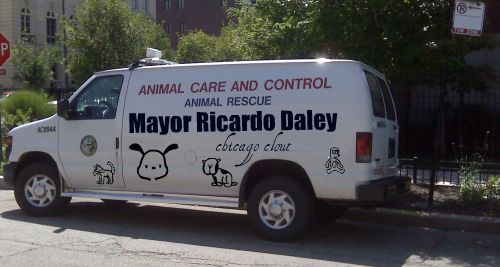 Dudes, do not park here. This picture was taken today at Superior and Hudson. Do not kill dogs. Dogs are nice.]]>Mayor Daley plays down deaths of dogs at city pound
Calls four mistaken deaths 'a mistake. They deal with thousands and thousands of dogs.'
Comments
July 16, 2010
By FRAN SPIELMAN City Hall Reporter
At the risk of alienating dog-lovers, Mayor Daley on Friday downplayed allegations that Chicago's Commission on Animal Care and Control mistakenly euthanized four dogs, destroyed records to cover it up and administered narcotics without "legally-required supervision."
Daley said the four deaths are a drop in the bucket, compared to the "thousands and thousands" of dogs handled each year by the $4.5 million-a-year agency.
"Mistakenly. Four. Four. … Mistaken. It's an accident. So, they corrected it. It's a mistake. They deal with thousands and thousands of dogs. Thousands. Thousands. FOUR," the mayor said of Inspector General Joe Ferguson's bombshell report.
"Let's put everything in perspective. I know you need news. But, put things in perspective."
Reminded that Animal Care has been accused of chronic negligence over the years, the mayor said, "Well, it should not take place. … We have a good commissioner there who's worked very hard."
He added, "The commissioner will respond to it appropriately and she's been working with the inspector general. When someone issues a report, they sit down and say, 'This is the facts on that, then all the sudden, it changes. That's what you really have to look at. There's nothing wrong with a report. But, then you have to get the facts on the report. We deal with facts and not just rhetoric."
Dr. Robyn Barbiers, president of the Anti-Cruelty Society, was somewhat surprised by the mayor's remarks.
Four dogs mistakenly euthanized over an eight-month period were all the inspector general's office could prove, but there may well have been many more such mistakes in recent years, sources said.
"It was a tragedy that it happened at all. … I'm certainly glad it wasn't more. But even one mistake like that is a tragic incident," Barbiers said.
"If it happened to me — if I was the person who made the mistake — certainly there would have been an apology. … There may have been an apology [from the city]. This happened several years ago."
She added, "Instead of harping on things that happened several years ago, let's make sure that things have changed and practices have been put in place so that it never happens again."
The Chicago Sun-Times reported in 2006 that a police lieutenant's dog was euthanized when it was supposed to be held for a 10-day rabies observation, triggering the inspector general's investigation.
The lieutenant who lost his dog could not be reached for comment on the mayor's remarks.
Three Animal Care employees have been fired, including the chief veterinarian, and five others have been disciplined in response to the inspector general's report, released this week.
The housecleaning at a 68-employee agency that's had a revolving door at the top prompted Ald. George Cardenas (12th) to suggest that the city privatize animal care because, "Obviously, we're not doing it very well. … Look at the poor supervision. Look at the lack of controls. It's a mess."
It wasn't the first time the Commission on Animal Care and Control has been accused of mistreating animals.
In 2005, then-Executive Director Nikki Proutsos resigned her $87,756-a-year job amid allegations that dogs at the city pound were lying in their own waste and power-washed while inside their cages. The allegations came from volunteers who donate their time at 2741 S. Western.
Proutsos' predecessor, Anne Kent, was a former Streets and Sanitation deputy with no background in animal care.
Current Executive Director Cherie Travis has responded to the inspector general's report by saying she intends to bring in managers and supervisors who "know how to be accountable for things that go on in the building."