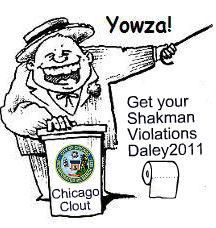 Many people in Chicago are struggling to make ends meet. Thanks to Mayor Daley and his insane desire to sell everything for a quick profit, we will give our children a grim future. Daley continues to lie to the press and the press continues to warn us. One of the greatest problems is the constant promotions to political family members and hacks. One of the positions that make us sick is Alderman Crothers brother. It is great to be the Alderman’s brother, but nutty Daley put a gun and badge in the wrong hands. Daley does not want average citizens with a gun, but this loon carries 24/7? In the rumor mill is the promotion of General Superintendent at the Department of Water Management. The promotion might be reposted because one of the clout dummies did not interview well. The Shakman monitor allows reposting which is a scam. This is a moral buster. Enjoy Daley2011, the City is worse by the minute. Patrick McDonough