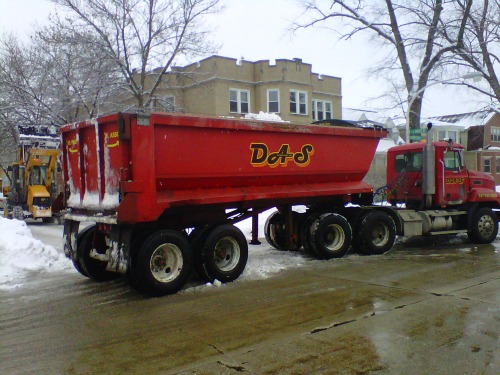 The 2011 Blizzard was another feast for Mayor Daley’s “Hired Truck” pals. Nothing like an emergency to rape and scam the Chicago Taxpayers again. Chicago has never learned its lesson and continues to make the non-union scabs and suburban trucking companies millions while Chicago residents sit at home and starve. What a going away present for Daley and his 11Th Ward goons. This weekend was a prime example of union city workers sent home while members of Local 150 continue to load the “Hired Trucks”. Chicago Teamsters get part-time work thanks to paying for the excess and debts Daley piles on the back of folks struggling to make ends meet. Daley leaves poor blacks and Hispanics with no future or job while the suburban trucking companies prepare to pillage the city to bankruptcy. What did the Union Teamsters and Operating Engineers do about this? Much of this work is under supervision of union workers/ What are you doing? Now some unions think Rahm is the answer, better think that one over again. Will the Office of the Inspector General investigate if prevailing wage, living wages and benefits are paid to these scabs? We also need to watch out for kickbacks. Photo by Chicago Clout Inspector.