<![CDATA[<img alt="Abdon M. Pallasch Sun-Times Reporter? Picture by Patrick McDonough" width="500" height="335" style="" data-src="https://www.chicagoclout.com/Abdon%20M.%20Pallasch%20Sun-Times%20Reporter.jpg" class="mt-image-none lazyload" src="data:image/gif;base64,R0lGODlhAQABAAAAACH5BAEKAAEALAAAAAABAAEAAAICTAEAOw==" /> According to Abdon M. Pallasch, lawyers laugh over the bid to knock Rahm Emanuel off the ballot. Enjoy this picture at the Chicago Board of Elections when Abdon made an absolute fool of himself drooling on every word that came out of Rahm’s mouth. Abdon even needed to replenish his mouth with fresh Kool-aid from all the slobbering and gushing, giggling and reacting like a little school girl at every action of his boy Rahm. During the entire Board of Elections hearing, Abdon showed complete and utter disregard for his professional ethics in reporting. Abdon took every opportunity to ridicule every objector standing forward to expose Rahm Emanuel and the rigged Board of Elections. Just remember folks, Burt Odelson never should have been put into the same hearing as the other objectors so he could fail by himself. Burt Odelson failed with all the other folks that challenged Rahm. The objectors stood up because they care about the constitution. Burt Odelson got paid for his loss, the other objectors worked for free. Burt Odelson said, “I tried to separate myself from the crazies”. I guess we know Burt is the real asshole and Abdon M. Pallasch can continue to pucker up to it. I want all the Chicago Clout fans to know, the outcome of Rahm’s fate was set in stone before he ever walked up to the plate. I have proof of what happens to Hearing officers that don’t get the decision right the first time. I have proof of Hearing Officers fate when they open their mouths and utter the wrong words. The Chicago Taxpayers lost more than anyone else and they will until they give a damn. Release the video of the hearing ABC7… Photo by Patrick McDonough Rahm Emanuel Objector 007. Read Abdon M. Pallasch’s article here, than use for toilet paper. ]]> END_OF_DOCUMENT_TOKEN_TO_BE_REPLACED

Marge was punching away for Rahm Emanuel today. She talked about the things like where Rahm was for the last few months. I suggest this lady will become a Commissioner if Rahm ever wins the Mayoral Race. She is a communications expert, or so she says. Photo by Patrick McDonough. 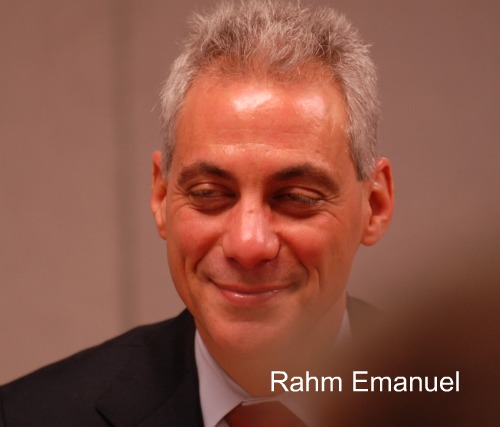 Rahm Emanuel had a very long day at the Chicago Board of Elections. Attorney Russ Stewart did an amazing job on behalf of Patrick McDonough of Chicago Clout, objector. The Chicago Media has made Rahm Emanuel the chosen one. It is not the way it is to go after having a nut case like Daley for the last twenty years. Photo by Patrick McDonough