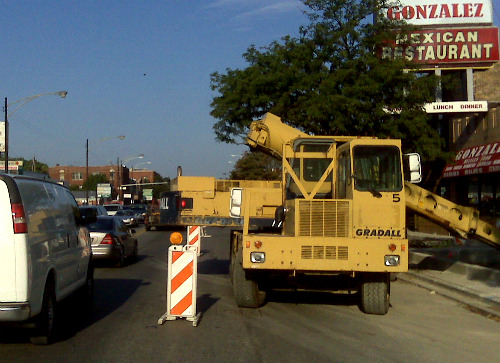 Most people know the fastest way to save lots of money in construction is to avoid safety rules. These actions backfire when someone gets injured or killed. I have talked about the complete and total reckless disaster at the Milwaukee Avenue, Cicero Avenue, and, Irving Park construction area. Mayor Daley packed this project with minority companies that are not working fast enough. Day after day, week after week, year after year, this project continues. It looks as though Daley is using taxpayer’s money to train Hispanic workers that speak very little or no English. As Americans starve, Hispanics are working all over Chicago in publicly funded projects. It gets worse every year. What a scam. I hope these companies pony up for Mayor Daley’s re-election. This is the new version of Hired Truck Scandal. I never see women or blacks on these sites. I never see gay workers. What a joke. Mayor Daley is heading to China to sell some more assets. It is all a joke. Other countries stopped coming to Chicago due to corruption and mis-management. This company has gradall equipment rolling into the lanes with no flaggers or barricades. I called Chicago emergency 311 and nothing was done for the public yesterday of today. If you are white and out of work, do not go to this jobsite, honky. Photo by Patrick McDonough. (Funny Story) A City of Chicago Department of Water Management boss that had a best friend fired so she could get a promotion, called in to one of the districts to announce he/she was heading in. Trick learned from Daley?