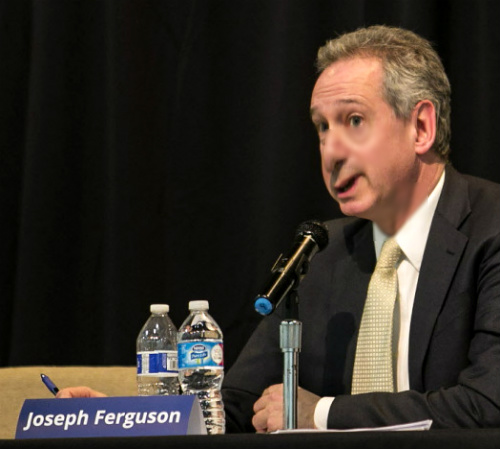 CHICAGO 10/17/2017, 06:03pm Fran Spielman
Inspector General Joe Ferguson on Tuesday shed more light on the email scandal in Chicago’s Department of Water Management in a way that raises questions about just how much has changed since the appointment of an African-American commissioner.
In his quarterly report, Ferguson talked about the investigation that determined that a “supervisory employee” he refused to identify “received numerous racist and offensive emails on his city email account over the course of several years and failed to report those emails” to his superiors.
In at least one instance, the supervisory employee provided an “affirming and acquiescing email response,” the inspector general wrote.
“For example, the employee received several emails in which the senders reference or mockingly imitated Ebonics; received multiple racist jokes via email and received several emails disparaging or belittling an African-American employee,” the inspector general wrote.
Ferguson recommended that the supervisor be fired and placed on the Do-Not-Hire list.
Instead, Water Management Commissioner Randy Conner reduced the punishment to a 14-day suspension, the inspector general said.
“DWM acknowledged that the employee failed to report receiving numerous racist and offensive emails, but noted that the majority of emails in question were also sent to three top-level managers, including the commissioner at the time,” Ferguson wrote.
“DWM stated that, when ‘one’s entire chain of command is on emails and/or engaged in a certain type of behavior, confronting the situation may seem untenable for a less senior employee….DWM further noted that the employee was the recipient of one of more ‘harassing and/or sexually explicit communications,’ which created a hostile or offensive work environment.” Sponsored by Dr. Jart+
In June, a housecleaning triggered by racist, sexist and homophobic emails swept out Water Management Commissioner Barrett Murphy, managing deputy William Bresnahan and district superintendent Paul Hansen.
Four current and two former Water Management employees–all African-Americans-have filed a federal lawsuit accusing the department at the center of the Hired Truck and city hiring scandals of “a hostile and abusive work environment” based on race that includes violence, intimidation and retaliation that “weave a tapestry of hostility that dominates every aspect” of their job.
That includes less-desirable shifts and work assignments and being denied promotions, transfers, overtime and training opportunities. Black women were routinely referred to as “bitches and whores,” the suit contends. Those who dared complain were also punished with “unfair, arbitrary and capricious” discipline, plaintiffs claim.
Last week, South Side Ald. David Moore (17th) demanded City Council hearings into the racist culture that, he claims, continues to permeate Chicago’s Department of Water Management–even after an email scandal triggered the appointment of Conner.
To underscore the point, Moore displayed a photo taken in April of a Water Management truck with a noose hanging above the steering wheel.
According to Moore, the unidentified perpetrator of the offense apologized to co-workers who might have been offended by it and got off with a reprimand.
Conner responded by saying that the noose photo was taken two months before he took over and the incident was “dealt with the same day.” According to insider, David M. McKinney a Motor Truck Driver for the Department of Water Management had something to do with the Noose. Now that dude has some serious clout. According to sources, he went in front of Dwayne Hightower and got off easy.