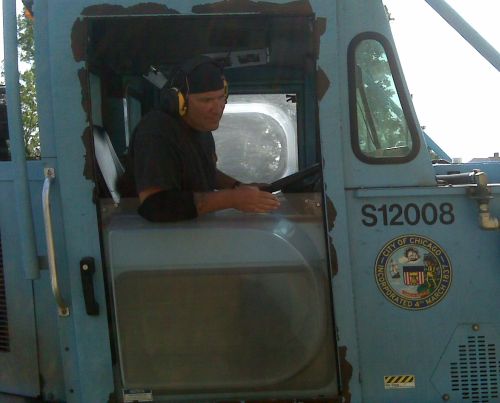 The City of Chicago has a crime ridden Streets and Sanitation Department so bad, Mayor Daley shuffles the high ranking members like a deck of cards. One of the employees today crossed a ward boundary in the afternoon to give me some grief. Streets and Sanitation wards are run by Ward Superintendents usually under the control of the local Alderman. I think this dude is with Alderman Allen and the 38TH Ward goons. Today, he crossed Addison Avenue at about 1:00 PM and started venting about safety issues, safety vests, I think he is very upset with his job and he is upset with the world. As a whistleblower against Alderman Allen and the City of Chicago in general, I get lots of tough guys that want to lull me into a fight and torment me on the job. In the past, guys that made my life miserable were rewarded with overtime, favors, and respect when they verbally assaulted me. Many other acts of random violence occurred on a regular basis. The Street Sweeper is a job that is considered a plum assignment to get you out of the garbage truck. The garbage truck is always hot for the driver, the engine is right under you; it stinks bad, and is a dangerous job. The rumor around the Teamsters was, ring a few doorbells, kiss a little rump, and walla, you are on the Street Sweeper. I tried to find the name of this dude, but Alderman Allen’s staff was not sure, Gregory Von Moser, and his replacement was scared as a cat to talk. This Street and Sanitation Street Sweeper needs to wear a helmet on duty, wear safety glasses, wear his safety vest, wear gloves, wear his seatbelt, and keep the clear plastic deflector for branches up at all times. He might also need to keep in his own ward and stop harassing whistleblowers. If you know what this goon was doing in the 30TH ward today, give me an e-mail, Mayor Daley wants you concentrating. Photo by Patrick McDonough.