On July 21, 2006, I was present when Ralph Cortez the Central District gave a demonstration in front of the new City of Chicago Department of Water Management Laborers. Ralph is the Caulker-in-Charge of the Day Hydrant Truck. Ralph was very professional and showed some tips on working safe. After, a demonstration was held by Claude Driver a Chicago Licensed Plumber that runs the Valve Truck. Claude showed the proper way to work the valves on and off. I hope more new City of Chicago Employees get the proper safety training. This should reduce the millions spent on injuries. Thanks also to Pete and Chief. Thank you Chicago Tribune and Chicago Sun-Times. Worker Safety in Chicago is Job One. Patrick McDonough.

I have been on many television show, news stations, radio stations, and numerous newspapers. One great public citizen is Frank Avila, a lawyer that has come out against H.D.O., public waste and fraud in Chicago. When I was first in print I was referred to as “Deep Water”, as I just gave up on the practises in Chicago City Government. Long before the everyone decided to become Whistleblower after the fact, Frank Avila and Patrick McDonough were in the forefront making the changes for better government. Long before whistleblowing was popular, Patrick McDonough said, “It is the duty of every public employee to report corruption”. Later Supreme Court Justice Souter with refinement and elegance gave whistleblowing a boost by stating, “Any person in Government Service should put loyalty to the highest moral principles, and to country above loyalty to persons, party, or government department,” and shall “expose corruption wherever discovered.” Photo by Brigid McDonough.

Please remember to pull permits on all plumbing jobs in Chicago. There is no exception. Also all jobs must be inspected by a City of Chicago Plumbing Inspector. If you have any questions call City of Chicago 311 help line. Also insist on an Union Licensed Plumber. Call Plumber’s Local 130 to get the training you need to be a professional. Also feel free to E-Mail me with any questions on Plumbing License Law in Chicago or Illinois. Photo by Brigid McDonough.

At the last Irish American Heritage Center Fund Raiser, a gentleman that portrayed himself as a staff photographer for the Chicago Tribune fell down the steps on the way home. Please be alerted some people attempt to be “Media Types”, and they are not. The Media I.D. was returned to the Chicago Tribune Staff and judged to be a fake. So watch who takes your picture and their motive might not be as good as you think. Photo by Patrick McDonough.

Patrick McDonough arrived on a very deep and dangerous excavation in need of shoring (July 12, 2006). The Project is for Sergio & Banks. You know Alderman Banks nephew. The site was at 21 East and 19 East 26th Street right by the El tracks.
Upon arrival to make water main taps, The Plumbing Contractor had no shoring in the ditch. I alerted Paul Montes, who alerted Mr. LoVerde, the Central District Superintendent, and the contractor was ordered to install shoring. In only twenty minutes the ditch was shored and Mr. Angel Gonzalez, a highly respected District Foreman showed up to make sure everything was safe and sound. These were dangerous and difficult taps and the job was performed to perfection by Patrick McDonough, Chicago’s greatest Plumber and John Hickey, Chicago’s greatest laborer. The ditch was eight foot deep, but due to the shoring, and the skilled Chicago Employees, the job went complete in a safe and professional manner. That’s how it done right!!! Also thanks to Chicago Reporters, safety is job one. Thanks Photo by Patrick McDonough. 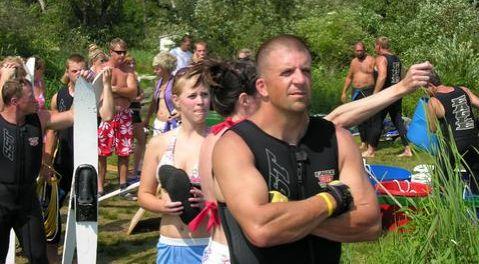 This gentleman is cut and buffed like someone half his age. If you wish please help this group of skiers fight the good fight. aquaskiers.com Thank you. Photo by Patrick McDonough

I hope we all know when Clout Lawyers and those lake Johnny Come Lately Snots like the Kochlefl’s decide to come in and start trouble with a great tradition like the Lauderdale Lakes Aqua Skiers need a looking into by Media. Thank you to Chicago Fox News for helping get the story out. I also thank Ms. Black of the Chicago Tribune for the front page article ‘The Battle of Don Jean Bay’. I also thank Mike Heine of the Janesville Gazette for telling the ski team side of the story. My wife a former member of the ski team, a Baywood Estate member, is totally for the Ski Team. I agree, and will look into some of the rats taking away good honest fun. If you wish to watch the team and yell obscenities at the Johnny come lately trouble makers, I will have you on my boat next weekend, and to watch the skiers perform. Photos by Patrick McDonough. 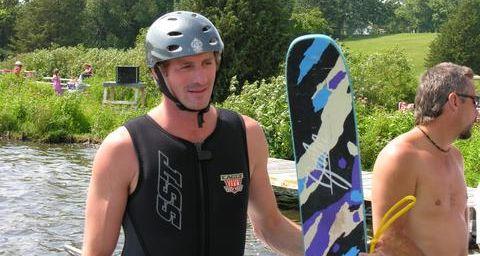