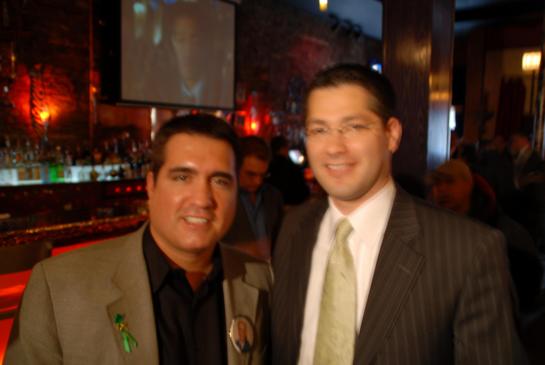 Usually I write quite a bit about an Alderman, feed you with some gossip or some unknown political treachery, ect. Alderman Flores is a very good leader of the first ward and does a great job. On Sunday, February 11, 2007, the Illinois Committee for Honest Government gave an Award to Alderman “Manny” Flores. Alderman Manuel Flores was presented by Frank Avila, Legal Affairs Director. This event was very well attended despite Barack Obama that was only a few blocks away at the Chicago Journeyman Plumber’s Hall. I wish I could have stayed at the event, but I could not. The event was at Plush Chicago on 1104 West Madison St. in Chicago. Also at the event was Frank Coconate, Chairman of the NWSDO. Nice classy affair Tony Joyce and Randall Sherman. Photo by Patrick McDonough.