Read, Learn, and be smart. Read below

Do you want honest reform in Chicago? Mayor Daley want to tie the hands of the Inspector General. Mayor Daley, Alexander V. was a farce and a joke, are you getting scared? Read on honest Chicago Taxpayers, and read between the lines. Click below. Patrick McDonough

END_OF_DOCUMENT_TOKEN_TO_BE_REPLACED

Please see attached wisdom. I first read about it at http://capitalfax.blogspot.com/ This is a great website if you wish to know what is going on in Illinois Politics. Click on the entry below. It will open your eyes. Patrick McDonough

Chicago’s most vocal leader for the Chicago City Worker is not feeling well at this time. I ask everyone to please say a prayer for him in this time of need. Remember, Frank Avila Jr. has taken on the most difficult cases in a most unselfish manner. I consider Frank Avila Jr. a true friend and warrior for all those downtrodden. I hope God will have mercy and have compassion during these troubling times. Photo by Patrick McDonough

Mayor Daley is really outdoing himself when he is asked about the foreclosure rate in Chicago. In the big city of New York, 1 in 305 homes are in foreclosure. Chicago has 1 in 88. Mayor Daley, that is a massive failure for you and your administration of political hacks. Mayor Daley blamed everyone but himself. He said the Feds need to address the issue and the mortgage companies are at fault. Most people that are in foreclosure, took out to large of a loan, lost a job, had a spouse lose a job. Many time it is from gambling, drugs, and booze. Many times it is from a divorce, and we know divorce is directly linked to finances. Daley and his cronies are trying to pass more taxes on bottled water, why in the hell would Daley and his administration be drinking bottled water in public, this is an insult. (We covered that topic here over a year ago) Daley is as guilty of screwing up finances as anyone, but remember, most homeowners cannot sell a bridge or a parking lot to bail out of mismanagement. Most homeowners do not have a private police force to go out and increase revenue by ticketing drivers (customers) for revenue shortfalls. I hope Chicago takes a closer look to the high amount of foreclosures, Daley is anti-labor, pro-big business. I hope when you think about taking out a second mortgage to pay Chicago’s high taxes, you think twice about your Mare Daley and his wild spending that YOU are paying for. Patrick McDonough.

Read this important article by Todd Lighty and Laurie Cohen of the Chicago Tribune, If you are busy, let me explain, Daley cannot control Hoffman of the Chicago Inspector General and now wants an agency that will rat out what David Hoffman is trying to accomplish with limited funds. Mayor Daley wants to control everything, just like he controls the 11th Ward newspapers that hide all the crime, drugs, and prostitution in Chicago’s 11th Ward. Enjoy this masterpiece.
City hiring plan blasted
Critics say sudden court filing skirts earlier settlement

By Todd Lighty and Laurie Cohen | Tribune staff reporters
August 17, 2007
Just months after agreeing to settle a long-running court battle over politics in city hiring, Mayor Richard Daley’s administration submitted a plan Thursday that critics say violates the agreement and would limit the role of the city’s inspector general in policing hiring.
City Hall abruptly filed in federal court its new plan to keep politics out of city jobs, despite failing to resolve a dispute over how the city would monitor hiring.
Under the agreement signed this year, the city was not supposed to file the plan if any disputes remained, said Michael Shakman, the attorney who for decades has tangled in court with the city over hiring. Shakman said he was taken aback by the city’s filing, which he said violates that agreement.
“The city should withdraw the plan and do what the court order says,” he said.
Jodi Kawada, a spokeswoman for Daley, said the city had not broken its agreement with Shakman. Kawada said the federal judge who oversees the case in court would settle any outstanding disputes.
Daley’s administration reached its agreement with Shakman in March as a way to end a federal consent decree that bans politics from most city hiring decisions. City Hall agreed to the settlement after federal authorities won convictions last year against Daley aides for operating a massive hiring-fraud scheme that rewarded the mayor’s political allies with jobs and promotions.
As part of the agreement, which was approved by the City Council, the mayor issued an executive order against political hiring. The city also created a $12 million fund for people who have been discriminated against because they lacked political clout to get a job or promotion.
The agreement called for a new hiring plan, covering nearly all facets of city hiring procedures, to be filed with U.S. District Judge Wayne Andersen as early as April 30. Noelle Brennan, previously appointed by Andersen to monitor city hiring, was supposed to report to the court any “impasse” regarding the proposed plan, and the judge would mediate the disputes.
For months, Shakman, Brennan and the city have been unable to agree on a hiring plan. The main sticking point has been whether Inspector General David Hoffman would oversee city compliance with hiring procedures. But Daley has proposed creating a new office of compliance to oversee the hiring system.
Under the agreement, Hoffman is in charge of investigating complaints from job applicants and city workers. Shakman and Brennan also want Hoffman to be in charge of overall compliance, including auditing personnel practices of City Hall departments and absorbing some of the duties now handled by Brennan.
Daley appointed Hoffman, a former federal prosecutor, in 2005 in the midst of the hiring scandal to beef up an office long regarded as ineffective. Unlike other top mayoral aides, Hoffman has no political ties to Daley and serves a fixed, four-year term.
Although Hoffman was appointed by the mayor, Andersen has said that Hoffman has shown independence from “the normal chain of command” in the Daley administration.
Shakman said Hoffman should oversee compliance because “the city has not proven itself to be trustworthy to administer its own employment policy.” Shakman said he would ask the city to withdraw the hiring plan.
Brennan’s lawyer, Ines Monte, said the monitor agrees that “oversight of the new plan needs to rest with the most independent part of city government. That’s the inspector general’s office.” Monte said she will respond to the city’s plan in court.
Kawada said the proposed compliance office would not weaken the role of the inspector general in investigating wrongdoing. “The compliance department will complement the existing functions” of the inspector general, Kawada said. “We anticipate the two departments working together.”
Hoffman declined to comment on the dispute. But Daley’s decision to create an office with similar powers to those of the inspector general is the latest in a series of setbacks for Hoffman.
Daley this year rejected Hoffman’s request for additional investigators to probe allegations of hiring abuses. Daley’s aides also turned down Hoffman’s recommendation to fire Christopher Kozicki, a senior city official with political connections to the mayor, for his role in rigging the hiring of an unqualified teenage building inspector.

Enjoy this great article by Laurie Cohen and Todd Lighty, a great pair of Chicago journalists
Officials will testify on zoning
Bridgeport dispute must be told under oath, judge rules
By Laurie Cohen and Todd Lighty | Tribune staff writers
August 17, 2007 City Hall officials will have to testify under oath about allegations that the city blocked zoning changes to punish a controversial real estate developer.

A federal judge on Thursday agreed with developer Thomas Snitzer that the testimony was needed to find out whether city officials have held up the rezoning to force Snitzer to drop a lawsuit against the city and several of Mayor Richard Daley’s political allies.

U.S. Bankruptcy Judge Jacqueline Cox said she was concerned about the claim that the city might improperly be linking the zoning changes to Snitzer’s lawsuit. The allegation of a linkage “does trouble me,” Cox said at a court hearing on Thursday.
Even though a city lawyer denied the charge and objected to the request for sworn testimony, Cox said that “a denial under oath would be more convincing.”
After the hearing, Edward Feldman, Snitzer’s lawyer, said he would probably get a sworn statement from Ald. James Balcer, whose 11th Ward is the site of the Bridgeport Village housing development built by Snitzer and two partners. Balcer could not be reached for comment.
Feldman said he plans to obtain depositions from a couple of other city officials, but he has not yet decided which ones.

Bridgeport Village, a 115-home luxury development on the South Side along the Chicago River, filed for bankruptcy protection in March. The developers are trying to sell the project’s key asset, 25 acres of nearby industrial property, which is expected to bring millions of dollars more if it were rezoned for residential use.

In a Bankruptcy Court filing last week, Snitzer charged that the Daley administration might be blocking the lucrative zoning change to pressure him to drop his federal lawsuit against the city.

That suit alleges that Snitzer was forced out as manager of Bridgeport Village in 2005 because he refused to give favors and take orders from 11th Ward operatives, including former top Daley aide Timothy Degnan and Degnan business associate Thomas DiPiazza.

City officials have said that they helped persuade a state court to oust Snitzer because of building-code violations at the project.
On Wednesday, U.S. District Judge Samuel Der-Yeghiayan, who is overseeing Snitzer’s federal suit, dismissed Degnan and DiPiazza as defendants, but left standing two civil-right charges against the city and former Building Commissioner Stan Kaderbek.

Snitzer’s main evidence that the city might be holding up the zoning change is a sworn statement by Feldman. In the statement, Feldman said that Steven Towbin, a lawyer for Snitzer’s partners, said in a phone conversation on July 19 that city lawyers had told Towbin that Snitzer’s lawsuit was “not helpful” to the city’s consideration of rezoning.
At the bankruptcy hearing on Thursday, Towbin denied that he told Feldman that city lawyers linked the zoning changes to Snitzer’s suit. Instead, Towbin said city lawyers “made it very clear to me that there is no linkage.”
Towbin acknowledged, however, that he had told Feldman that his own opinion was that the lawsuit would hinder the chances for City Hall approval of rezoning. “When you sue somebody and call them a criminal, it’s not helpful,” Towbin said.
Towbin also said Balcer has recently met with one of Snitzer’s partners, John Kinsella, and has promised to meet with potential buyers of the industrial property.

I hope the 11th Ward knows what happens to those that lie. John Daley would be a great help also, right Rich? 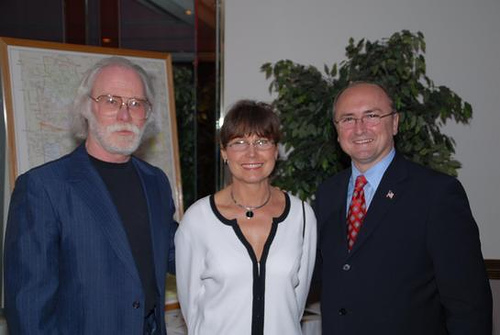 Please enjoy this picture of Russ Stewart, Mrs. Stewart, and Tony Peraica. Tony Peraica is running for Cook County State’s Attorney. This is a powerful office that could start to remove the corruption in Illinois. I would support Tony Peraica for any office he would choose to run for, but he will face a full blown assault from the Chicago Democrats. Dick Devine was nothing to write home about, and failed miserably to prosecute political clout and corruption in Chicago. Tony will face the most corrupt election he has ever faced in this race. Good luck Tony, the 11th Ward will put all resources against you. Photo by Patrick McDonough.