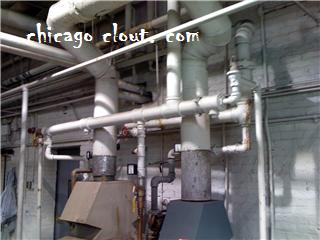 Expert Analysis by Patrick McDonough. Please enjoy this exclusive photo of a boiler system in the Jose de Diego Community Academy in Chicago. The Chicago Department of Water Management got a sock in the eye when a water main break was handled by the North District Department of Water Management. The North District suffered multiple embarrassments after drug, gambling, prostitution, hired trucks, and multiple investigations have surfaced the last few years. The North District workers include many Caulkers and Foreman that are not Licensed Plumbers, a political favor that will continue to plague the Department and the Taxpayers of Chicago. Chicago needs the Water Department to review who made the water main repairs, and make sure the proper procedures were followed when a water main is shut down. More on this later. Please click below to read the article. Plumber’s Local 130 must “Protect the Health of the Nation” and review what was done at the water main break. I reviewed the PDF report by the Chicago Plumbing Inspector and reviewed multiple pictures of the boiler room. Why is the CPS hiring handymen and Pipefitters to handle work requiriing Licensed Plumbers. I want Tom McManus and Tom Durkin to investigate on behalf of Plumber’s Local 130 members sitting at home with no work. Photo by Chicago Clout Investigator General Team.

]]><![CDATA[ <p>‘It’s not enough’
WATER RATION | For 11 weeks, students at Jose de Diego Community Academy have been given as little as half a glass of water a day, since a water main break Sept. 14 uncovered plumbing problems

That was the plea this week from 12-year-old Kahiara Vazquez, one of 1,100 children at Jose de Diego Community Academy who have been given as little as half a glass of water a day at school for the last 11 weeks.

De Diego officials say they have been told to ration water since a main outside the Humboldt Park school broke Sept. 14.

All 14 school water fountains have been taped shut ever since, leaving some kids to feel faint from thirst after gym class, some mothers to worry whether their children will have enough water to take medication, and pregnant teachers to lug bottles of water around with them in the school at 1313 N. Claremont.

After a Chicago Sun-Times reporter visited the school Tuesday and called three city agencies, the water was tested Wednesday. Results are due today, and Chicago Public Schools officials say if all goes well, drinking fountains should be flowing again by Monday

“It shouldn’t have taken this long,” said CPS spokesman Michael Vaughn. “We apologize for that.”

Kahiara’s mother, Judy Vazquez, said the school has been stuck in a bureaucratic limbo since the water main broke during the second week of classes.

By Oct. 24, CPS managing engineer Joseph Claire forwarded Vera an e-mail from Water Management saying tests indicated the water had “much improved” and the school could lift the water restrictions, as long as it flushed all water fountains and kitchen sinks for a minimum of two hours on the first day of the school week for the next six weeks.

That same day, Vera said, a Building Department inspector showed up, based on an anonymous call about the school’s water quality. Vera said that inspector told her “the wrong check valves were installed, and they were installed improperly.” She later received a fax listing 21 “alleged building code violations” and a handwritten note citing “health & safety issues — children/school/teachers.”

“All I received from them is the runaround,” Vera said.

“I want something in writing telling me what’s going on. I’m not a plumber. I can’t determine when something can be on and when it can’t be. … I’m responsible for 1,100 students. All I want is what’s best for them.”

The check valves have since been replaced again, CPS has promised to address other problems — none of which affects water quality — during winter break, and CPS was never formally cited for building code violations, CPS and Building Department officials say.

On Wednesday, extra drinking water arrived in huge bottles. That’s good because all Kahiara knows is she’d like more than 4 ounces of water a day, the amount distributed at lunch in plastic cups with foil covers.

“I drink it, and I want more,” said Kahiara, an asthmatic who is especially parched after gym class. “It’s not enough. I need water.”