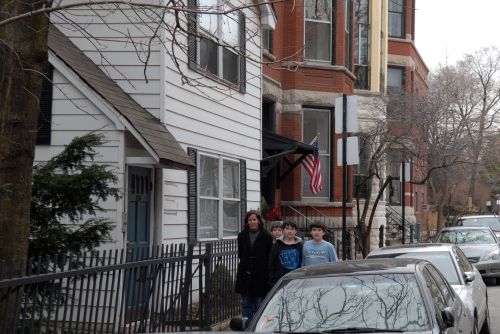 Renee McManus was posting me about her situation for so long I had to block her, I just could not take it anymore. Her e-mails were well written, intelligent, thoughtful and researched. At first I would read them, set them aside, and then she got the best of me, I told her I would stop over with a camera and listen to her story. She balked, made excuses, and the old defense mechanism kicked in, I was done. I am sorry if I offend anyone but, I figured she is a 400 pound crazy woman with an apartment full of newspapers to the ceiling. Lately, she was back on the site and e-mailing me so today I got around to see what was going on. I stopped by the apartment and was very surprised, she was quite the opposite. She is a attractive women and lives in a sparse clean and neat apartment. The apartment is located at 227-231 West Menomonee in Chicago’s near northside. The area is big money, neat, and classy. I walked around the building and I was approached by Bill Barry the owner, he demanded to know why I was inspecting the building; he told me Renee is suing him, ect. I saw exactly what Renee was talking about and she was correct in almost every aspect. I tried explaining the way you go about things can give you a more positive resolution. Renee has also clogged up the e-mail in every Chicago Department including the Chicago Inspector General. I hope the City of Chicago can go out and address her issues. I hope Bill Barry has enough common sense to “fish and cut bait”. I think those two should part company. Make sure if you have rental issues in Chicago to get the Municipal Code of Chicago Title 5, chapter 12, Residential Landlords and tenants pamphlet. I am going to ask some of my friends in the building department to investigate this building in depth. The City of Chicago should resolve these issues in a timely manner. Photo by Patrick McDonough

One Reply to “Chicago Clout got this one wrong; Chicago Rental Problems need Inspectors”