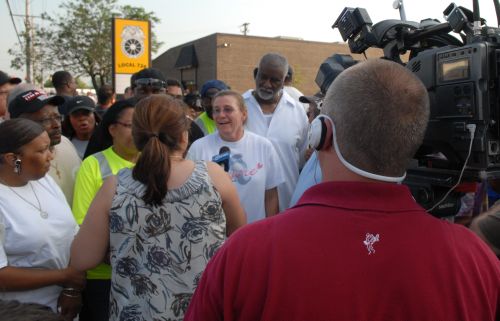 It is in the extended link below, it is a PDF END_OF_DOCUMENT_TOKEN_TO_BE_REPLACED

June 22, 2009 Tom Tresser is one of the leaders of No Games Chicago. I saw Tom and a group of No Game supporters on ABC 7 News just a few days ago. I could not believe Tom was on the news, in Switzerland, and pushing the agenda for No Games Chicago. This was a very brilliant move and I was a bit envious of the shear brilliance of the tactic. We enjoyed a question and answer period tonight, a couple of videos and pictures of the trip to Switzerland. When Ben Bradley of ABC 7 interviewed Tom, it was a golden moment Mayor Daley will never forget. I hope everyone helps No Games Chicago move along the path of success, they are doing a great service to all Chicago Taxpayers. Tonight, I enjoyed fellow supporters including Rachel Goodstein a friend of mine and the original pain in Mayor Daley’s rear-end. I look forward to an upcoming T.V. show with No Games soon. I am also proud of helping bring No Games to your attention a long time ago, thanks to Charles Walker. Photo by Patrick McDonough

June 20, 2009 Summit construction has been getting around the State and the City of Chicago like flies on crap. I first saw their song and dance on Cicero Avenue in the North side of Chicago. It seems companies pop up out of nowhere and then they are everywhere in Chicago. I was not impressed with this company, they are amateur and unprofessional in my opinion. Today this company was installing 8″ water ductile main and precast basins on the corner of Haddon and Marshfield. The company had some old dude around, an Indian Engineer(?), and about three of four laborers of Hispanic origin. They had some difficulty understanding me. I think the guy operating the cheap backhoe was a laborer. This is Saturday and I hope these guys were making time and one half, I hope they are following all Union rules. Chicago City Workers are told to sacrifice and starve, Mayor Daley’s private companies work the overtime. I got a call from the boss today and was offered some overtime. He told me I am on the list. I hope that list shows up in Federal Court, I was told there is a “Courtesy List”. Amazing, it has been months and I finally get an O.T. call at 9:51 p.m. on Saturday night, and now there is an OVERTIME LIST! I think I am on a list, but not the acting up list, the clout list, the holiday list, the old buddy and pal list, and the double time list. I am not on the Investigator List, the pay bribe list, and the secret list. I just want to make everyone aware of the cave-in tactics of the Chicago Unions, workers will pay and lose, Business Managers and Agents will not. Daley and his pals own your pension money and you will sacrifice and lose. Whatever you give up will not be returned. I cannot wait to see the overtime list when workers get comp-time instead of overtime; time for some overtime pigs to head back to penny slots or quit gambling! Photo by Patrick McDonough

Chicago Clout is a website that attempts to get at a truth. After working for the City of Chicago for a long time, you see many things that are not right. Many of the people trying to change things are retaliated against, fired, and demoted. Many employees are unsung heroes that go out of their way to make life better for residents. Many employees get so jaded they become another person, stealing, lying and cheating. Chicago City Workers also suffer from many personal issues which include alcoholism, drug use, and gambling problems. I see it every day and I do pray for all those afflicted. Watching time after time connected people taking and abusing the system, does cause depression in some employees. I sometimes wonder how Fran Spielman keeps it all together when handed lie after lie from Mayor Daley and his staff. Make no mistake, Fran Spielman has many friends in the City, she gets the inside scoop and shares the stories unselfishly. I hope all City workers read Fran’s take on Mayor Daley and his family taking advantage of the taxpayers time and time again. A former boss like Conrad Black makes one understand the realities working under goony Mayor Daley is really like. Again, Fran Spielman is the best of the best. Enjoy her story below. Patrick McDonough]]> END_OF_DOCUMENT_TOKEN_TO_BE_REPLACED

The City of Chicago has been henpecked by me for years to encourage safety. Day after Day for years, I called and called requesting trench shoring and safety opening policies. I am happy to report the City of Chicago Department of Water Management has improved; the wait to full compliance is a long and painful journey. I am surprised the Unions have not been more diligent in the safety concerns of the members. Today, a tragic and painful reminder has reared its ugly head, a Chicago Park District Worker died. (Mann Park) It seems the worker fell head first into an opening and drowned; I cannot imagine a more tragic death. I need to say it again, the people that work for the City of Chicago must understand, work safe, period. I hope Mayor Daley takes time to visit this poor man's family and give them comfort. If someone has information on Gene's family forward it to me so we can get a fund going. I hope everyone understands the stress Chicago workers face and realize Chicago Workers put their lives on the line every day. Worry about having a job tomorrow weighs heavy on all Chicago City Employees. Rest in Peace brother. Patrick McDonough P.S. I hope the buddy system was in place to help save this man's life, I heard it was not!