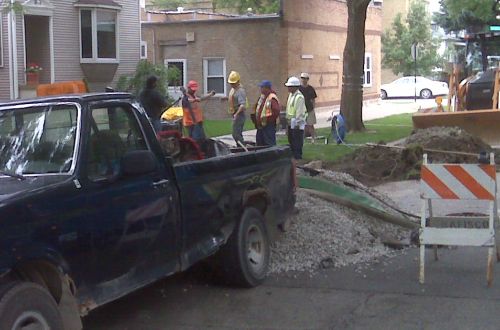 I have been very busy getting ready for the fall of the Chicago Union worker. I am a Democrat from way back when. I never thought I would see such a lack of leadership in the Chicago Union; people so scared and crippled as Dennis Gannon and the Chicagoland Union Management team. Dennis looks like a wounded puppy every time he is pictured at the latest City Hall bargaining sessions. Chicago labor bosses live like kings and their laziness is quickly destroying the union worker in Chicago. President Barack Obama enjoyed the Union money that made him a leader of the free world, but what did he do to deserve it? He bailed out the banks and America is quickly falling apart. George Bush made sure Chicago City Workers still had a job, despite his half baked leadership. Chicago Union leadership does not allow Union members to vote the amended contract. Union cowards refuse to listen to the input of their members. Labor has a ten year contact; Daley will break it, but still do everything in his power to keep the Olympics.
This is what the future of construction in Chicago looks like. The lousy construction work over the last few decades will continue to cause large expenses for homeowners. The lack of honest inspections and lack of enough inspectors will cause great pain and sorrow for homeowners. The waste and corruption from Daley and his goons have permanently crippled Chicago. Unskilled labor seems to save money in the beginning, but we will end up paying again and again.
This picture shows a group of workers that do not live in Chicago. They do not have the license or training to complete this job they started. Chicago Plumber’s Local 130 does nothing; this company is protected by Daley’s people. None of their vehicles have Chicago City Stickers or have signs indicating who they are. They are contracted to Mayor Daley’s Sewer program. They block streets, act like city workers, and in doing so, they also break laws. Mayor Daley’s engineering pals supervise these companies adding more expenses to taxpayers. No authorized Chicago personnel supervise these workers. No one from Chicago is verifying who they are and what they are doing. They do not swipe in or out. They do not live in Chicago. Some get paid to drive all the way to Lake County and back every day. Chicago Taxpayers get billions stolen and wasted year after year. I admire the Unions that stand up and demand the facts. The Unions better prove they did due diligence for this round of labor negotiations. They also better prove Daley has bankrupted Chicago before a single man or women lose their job. The many people that will lose their jobs from the city is because of the Shakman Violations. Many black and minority workers that got a chance thanks to our hard work might lose their jobs. Rahm Emanuel, Barack Obama, and Jesse Jackson Sr. have been mighty quiet. Two Aldermen have been chumming up to Daley lately selling out for their own advances. That was labor money that got them in their seats. Remember when the economy was cooking and not a peep was said about city workers – what happened? Let’s have some yuppies work behind a garbage truck for a while, see how long they last. Mayor Daley has destroyed this city and the checks and balances of union labor are crumbled. Photo by Patrick McDonough/ChicagoClout