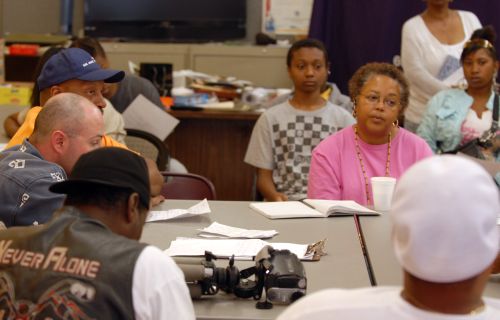 August 7, 2009. Yesterday was a very long day for me. It started at 6:00 a.m. and did not end until 3:00 a.m. the next day. I still in shock at the treatment I was given by Kenny Construction Company employees yesterday. I helped a cameraman from a major news station interview Chicago Teamsters 726 members that are laid off by the City of Chicago Department of Water Management. We were on a job site, a sewer main replacement on 75th Street in Chicago. I have become a skeptic of the Daley Administration, the more I see them in action. Daley has major infrastructure construction work around 75th and the Dan Ryan, sewers, water mains, and I also saw MAT and Kenny construction. I might have been fooled thinking Mayor Daley was really interested improving this black neighborhood, but I know better. I am implying Mayor Daley and his Olympic committee consider this area as a staging area for the 2016 Olympic bid. I also suggest Daley and his goons sewed up the deal for the Olympic bid long ago. I received information into the basic rules of trucking and prevailing wage law. For some reason the Chicago trade Unions allow grey areas in the trucking industry. These grey areas allow Daley’s friends to exploit fair play and make millions off the backs of blacks, Hispanics, and ex-offenders. The phony minority trucking companies fuel elections for both Democrats and Republicans. The Olympic bid will be profitable for Daley friends and supporters. The bottom line of the video below is making sure we thank Alderman Freddrenna M. Lyle of Chicago’s 6th Ward. Alderman Lyle, took un-scheduled time to make a meeting and hear Teamsters Local 726 issues, and answer tough questions from Chicago Clout. This would never be done by a white Alderman in Chicago, period. I was also ashamed by members of the Operating Engineers Local 150, the Journeymans’ Plumbers Local 130, The Laborers Local 1092, and other City Workers loading trucking companies that are not union members. The leadership of embroiled Teamsters 726 did not arrive out to the site to make an inspection. What kind of Union members would load scab trucking companies up when their brethren picket across the street? Most of the teamsters on the picket were black and Daley replaced them with Hispanic scab workers. The neighborhood is mostly black and Daley fired black workers, a page in the Bridgeport 11th Ward playbook. I am producing a show on this issue this month, I invite all. I am also proud to report a massive movement to raise funds for Teamsters victims of Daley’s privatization schemes, and a massive rally by all City Workers to help provide canned food and money to help the fallen union brethren. Call your local unions and get a discount on your union dues now! Your Chicago Unions have sold you out! Photo by Patrick McDonough.

4 Replies to “Let them starve, I got mine/ Mayor Daley's Hired Trucks return for 2016 Olympic bid.”