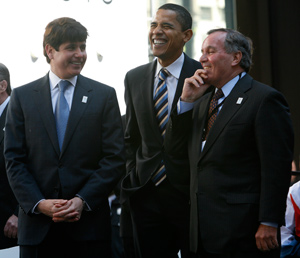 Rod Blagojevich, Barack Obama, and Richard Daley agreed to work together in Copenhagen for the 2016 Olympic Bid. It is still unknown how much taxpayers money will be used by Mayor Daley and President Obama. We need to see if the underfed and unnourished of the third world will be impressed when Barack Obama brings the taxpayers pimping plane into Copenhagen. Chicago Clout agreed to pay for former Governor Rod Blagojevich’s entire trip including the best hotels, food, and entertainment if he agrees to help Daley land the Olympics. Obama who proved to be a puppet for his straw boss Mayor Daley agreed to land the most devastating loss in Chicago’s history. I figure if we are going to go over the edge and become one of the most immoral bankrupt cities in the United States, we should make sure the three best leaders from Illinois should be together. The best part of the whole deal is when Barack Obama prints more money to pay for Daley’s dream and sinks America into further debt. I hope Daley brings China to Copenhagen as they already own America and should be consulted. I hope the Olympics go to Rio, but they better bring lots of cash to the table. America need less games and circuses for the peasants, we need good paying jobs. China is taking over the world while Daley worries about his personal circus, the 2016 Olympics. Chicago Clout editor in chief.