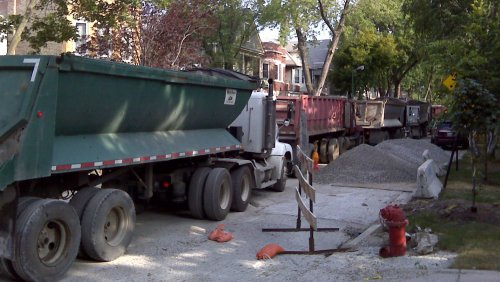 Most of this summer required me to watch Mayor Daley and his Administration continue to break the law of the land. Mayor Daley looked like a fool when the 726 Teamsters would not give into his insane demands. Daley was playing both side of the coin when he was telling the world Chicago had money, but he was cheating Chicago City Workers out of fair pay and work. Every Chicago City employee knows Daley laid off Chicago Teamsters and replaced them with Hired Trucks. Many of the Hired Truck Drivers are scabs and belong to phony minority and disadvantaged businesses. Mayor Daley may consider a black, a Mexican, and a women a disadvantaged human but I do not. I was contacted by several drivers from Midway Airport and several drivers from Local 726. I recommended a lawyer that would start and finish a lawsuit and not steal their money. I am very glad on October 13, 2009; Attorney Russ Stewart filed a lawsuit on behalf of what could become (200) two hundred Chicago City Workers. The lawsuit is against The Chicago Department of Aviation, The Chicago Department of Transportation, The Chicago Department of Streets and Sanitation, and my friends at the City of Chicago Department of Water Management. Want all those teamsters to know, I followed Hired Trucks and took pictures for free. The teamsters might have the last laugh yet! Here is the link https://w3.courtlink.lexisnexis.com/cookcounty/FindDock.asp?NCase=&SearchType=2&Database=3&case_no=&=&=&=&PLtype=1&sname=alonzo+anderson&CDate= Good luck everyone. Photo by Patrick McDonough