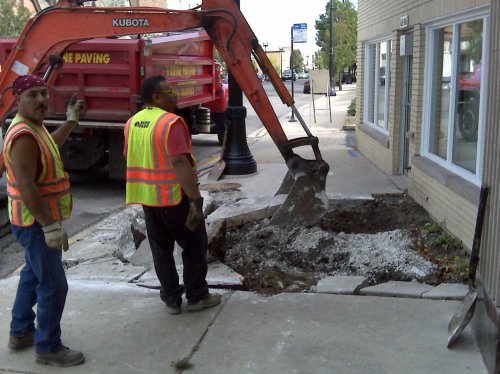 I was speaking to Chicago Cement finishers a couple of days ago, he was a foreman with Mayor Daley’s Department of Transportation. He spoke of the many months Chicago pays their workers unemployment as private contractors make tons of money. The City guys carded the Milwaukee Avenue (Jefferson Park) project that never seems to end. I have watched Mayor Daley and his goons continue to privatize work that should be done by actual Chicago residents. I guess Mayor Daley wants to be a big man to those suburban contractors that give lavishly to his Olympic bid and campaign coffers. This group of laborers was fixing sidewalks for Chicago’s Norwood Park business district. I am amazed at how these laborers are able to drive trucks, operate backhoes, and finish cement. I looked through Mayor Daley’s website and I could not find contracts for Rabine Paving. I think these guys were in the 6100 block of Northwest Highway. The picture was taken on October 5, 2009. A thank you to Mayor Daley, for Chicago is quickly going non-union and non-skilled labor will complete the many tasks. But I do not understand why the Office of the Inspector General does not take the time to investigate these contractors. I am finding an overwhelming amount of Hispanic workers; I do not find women, blacks, or handicap workers working for the private contractors. I think Mayor Daley’s trick is to have his friends and family start phony minority businesses, get the contracts as subcontractors, and laugh all the way to the bank. Photo by Patrick McDonough