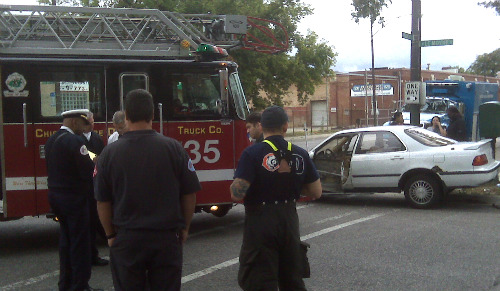 The emergency crew from the Department of Water Management raced to the scene today after an accident involving a Fire Truck, A Fire Hydrant, and a Auto. The driver of the car was taken away in handcuffs. Fire truck, ambulance involved in separate accidents
Comments
September 26, 2010
Sun-Times Media Wire
No one was hurt in two separate minor accidents involving Chicago Fire Department vehicles Sunday morning.
Both occurred about 10:15 a.m. — one at Division Street and California Avenue involved Ambulance No. 82 and the other was at North Pulaski Road and West Le Moyne Street and involved Truck 35, according to Chicago Fire Department Media Affairs spokesman Quention Curtis.
No one was hurt, according to Curtis.
It was not immediately known whether they were on their way to emergencies when the collisions occurred. This photo was taken today at Le Moyne and Pulaski Photo by Patrick McDonough