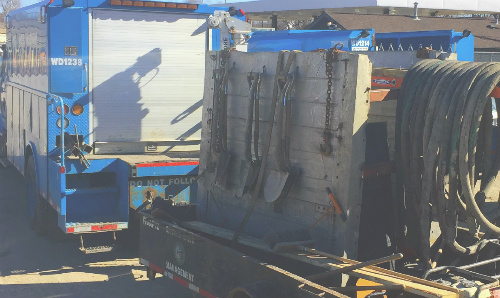 Please see attached picture if you want to know how Konrad Tucharski was crushed to death on February 13, 2017. If you look at City of Chicago Department of Water Management Leak Truck WD 1238 you will see on the right hand of the picture a silver colored ditch box. The box had holes drilled into it so it can be used as a shelf and for storing tools neatly. It is used for organizing shovels and probes. If you look closely it is not in proper working order. It has holes drilled into it.

This shoring is not taken off the trailer and not used as it is designed. The shoring should be loaded with mud and dirt. The sides should be worn and torn. The foremen in this truck is paid to fill out trench safety certifications on every job. The foreman in this truck is paid to make sure this safety equipment is used on every job. The foreman is also paid to make sure the trench box is working 100 percent on each job. The trench box must be inspected on every job.

Most Chicago foreman under the direction of Paul (DUI) Hansen, only put the box in hole, when the Safety Department is in route or after someone is injured.

Please do not tell that to the Tucharski Family the lies and phony safety precautions taken by the DOWM. Many North District employees were crying at work this morning as they knew it could have been them.

Chicago Alderman are demanding an investigation into the causes for the constant injuries and millions in workers’ compensation payouts. Chicago Alderman are also mad Rahm Emanuel is not on hand to take care of the family. Konrad gave his life for the citizens of Chicago. Rahm Emanuel cannot allow the same old stupid problems to go on year in and year out. Konrad must be a wake-up call to drug test all city workers, immediately fire slackers, insist city workers learn CPR and basic rescue. All crews should have emergency safety items to save lives. Will Rahm Emanuel save the skins of his political friends? We will let you know.

Rest in peace Konrad Turcharski, you were a great worker. Sorry the Office of the Inspector General never did anything about all those complaints on shoring. Maybe Joe Ferguson does not separate the wheat from the chaff like he thinks. Joe the blood is on you too.