Mayor Daley went to China to avoid the stress of political corruption, waste, and fraud. I am sure Daley could learn some new techniques of controlling the press and individual freedoms the Chinese government is known for. “I think people can learn from the Chinese Government about some crowd control if the U.S. Attorney tries to arrest Daley”, said a political insider that wants to remain unnamed. Patrick McDonough a future 48th Ward candidate for Alderman said, “I am following Daley to China (Town) to learn about how some Chinese are up-rising against the Brutal dictatorship like we have in Chicago.” I sailed from Andersonville down to this location”, said an exhausted Patrick McDonough. A.K.A. Captpaddy or “Deep Water”. Photo by Chinese Communist Mr. Wong.

May 14, 2006. Jesus Navarro a Chicago Department of Water Management Hero and Whistleblower is at Resurrection Medical Center still recovering from a cave-in that had no shoring. Jesus is assisted by Michelle a CNA. Jesus is now in room 2-575. Jesus a devote Roman Catholic was ordered by the City of Chicago’s health insurance company to under go physical therapy despite Sunday a day of rest for christens. Pictures were taken of Jesus right leg and knee grotesquely swollen from the therapy. Jesus used an ice-bag to control the inflamed knee. Jesus is very lonely and has not been visited by any Water Department Brass. Photo by Patrick McDonough

In Park Ridge, one of the best known Chiropractic Physician’s for Chicago City Workers is Dr. Robert D. Peck. If you are injured on the job and you want to get well as soon as possible, call Dr. Peck. I saw Dr. Peck again after seeing a Mercy work specialist. I was given a very dangerous psychotropic drug after telling the Mercy Work doctor, “I have a prescription that is not mood altering, and I do not want any “Anti-anxiety medication”. The Mercy Work referral was to Jeffery Kramer M.D.S.C. a neurology specialist that prescribed Amitriptyline “Elavil”. This stuff is as dangerous as Paxil. My doctor wanted me to take “Ramelteon”. Mercy Works is acting like a treating doctor to Chicago City Workers, that to me is fraud. Contact Doctor Robert D. Peck at 1-847-696-0040. I was never told my M.D. prescription was altered. Photo by Patrick McDonough

Chicago Department of Water Management launched a Newsletter to respond to the real insider reporting of Patrick McDonough and Frank Coconate. In the propaganda newsletter, we read about some admitted minor problem, and Dennis M. Kelleher who was forced out of office. He “starting his own business”, and I am sure to see him at the table taking money from the trough. Murphy should address why some are favored in the overtime allotment. His stand on privatization. I hope the Newsletter explains management view towards the workers. As expected this newsletter will be about what the chosen few are doing. “The Insiders”. My Newsletter for the day. A driver went to the “New and Improved” Inspector General today to explain an occurrence that happened months ago. When he told them about a crime months ago the I.G. informed Water Management and the case went dry. Today he demanded to know what happened and how the I.G. was covering up the acts. He wanted to know why he was called a liar. Noted when the Chicago Investigator General investigates criminal activities they do not have a court reporter. (Cover-up) But if they are investigating life of death issues like Chicago Residency Rules, it is a major investigation with the Commissioner of I.G., two deputy commissioners and a court reporter. He is placing a lawsuit against Chicago and the story has been followed by Laurie Cohen and Todd Lighty of the Chicago Tribune for months. Story two, Chicago also purchased more Trench-boxes from a suburban company for $187,511.68. This is an emergency purchase with no bid. The company is located in Crystal Lake, Illinois. (Lee Jensen Sales). Any crew with no pipe, tools, or material, now you know why. And I could not get $6.00 for plumbing parts. Sad but true. Lets get the story out to local suppliers to contact Water Management about doing business. Patrick McDonough.

Progress takes time. On March 10, 2006, after being informed of some semi-truck shipments to Central District, I am happy to inform some important progress. I will review the purchase (Leasing) arrangements at a later date. I think this is sending a signal that investment into making things “Right” is moving along. Some talk is already starting into who will drive the semis. Remember this is a pride thing and many drivers have “A” licences and consider it a honor to drive the big rigs. The “Hired Truck Scandal” and “Clout on Wheels Series”, has opened a can of worms, but the Ship seems to be making a wide turn in the better direction.

The Central District Department of Water Management, City of Chicago, and Chicago Safety Department started what is hopefully the first of a series of classes on Shoring Safety. The Shoring chosen by Chicago Water and Sewer Departments is a “PRO-TEC” Trench Shield. The ModSeries. Great start to avoid accidents and expensive lawsuits against Chicago Taxpayers. It was met with some moaning and groaning but was accepted after workers saw it was not to difficult to assemble. Mr. James LoVerde (A greatly respected Superintendent) said he wants to keep the system assembled and than dropped into the excavation to save time. (Brilliant) I am only concerned with assembly due to pinching hazards, I suggest leather gloves. In Chicago tradition, some parts turned up missing and the Adjustable spreaders would not work. However, it is a move in the right direction, and even though the company has no distribution stores in Chicago, this is a winner. I also suggest painting ugly colors to avoid theft in after market. Photo by Patrick McDonough. (Note the I.G. did not take my camera).

On May 9, 2006, Jesus Navarro a whistleblower in safety, harassment and racism in the Chicago Department of Water Management, suffered major trauma in a cave-in. Jesus is in Resurrection Medial Center with major hip surgery. Please send a card to Mr. Navarro at 7435 West Talcott. Again, there was no shoring in the ditch. Mr. Navarro will be out of work for a long time, he has a wife and children. He went into the ditch to avoid any more retaliation. Chicago Central District will have shoring classes Wednesday May 10, 2006. Please say prayers for Mr. Navarro, he will not have a check coming in for about two months. Note: Chicago Doctors said the best course of treatment would be to take pills, thank god Jesus checked with his own doctors. Photo by Patrick McDonough. 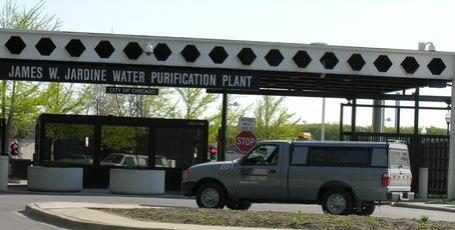 After a Safety Department meeting and seeing John D’Amico enter the Jardine Water Plant in Chicago, I saw a contractor I have researched parked out in front. One contract of this suburban company with Chicago stated the base contract is $50,000.00 up to $5,000,000.00, and not to exceed $20,000,000.00. Mayor Daley signs these contracts all the time. The real good contracts will be posted soon. And the alderman want a raise?

James T. Smith is Executive Director of S.O.W. Youth Outreach, inc. Located at 4320 West Madison Street Chicago, Illinois 60624 James is very interested in making like better in his community. To learn more about what we can do to make life better in chicago for the less fortunate, please go to sowyouthoutreach.tripod.com or E-mail [email protected] Office number 1-773-626-1451 Photo by Patrick McDonough