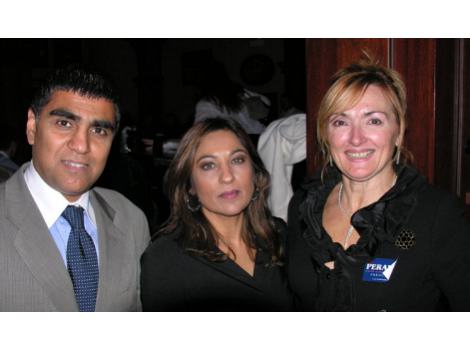 Bernie Stone has competition for alderman of the 50th Ward. Salman is pictured with members of Tony Peraica’s family. Salman has a web site, click here http://http://www.salmanforalderman.com/. Salman is very well educated and approved by Illinois Committee for Honest Government. The Frank Avila family are endorsing this candidate. Good luck Salman. Photo by Patrick McDonough. 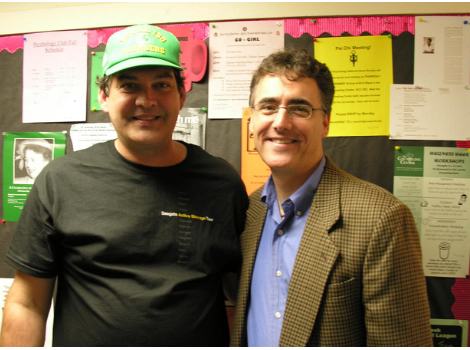 Tom Dart is the next Sheriff of Cook County, Illinois. I enjoyed my conversation with him today and I wished him the best of luck in his new job. Tom Dart is a very intelligent and brilliant person. He is a “Hands on” type of leader, and his style of management will be tested soon. Tom is taking on a very difficult position and I had fun talking about his nomination that made the papers. Of course, I cannot go into details of our conversation, but the entire class was impressed with him. Tom Dart won the election with 78% of the vote. He ran against Peter Garza who was featured on the web site before. The insider politics Tom talked about is priceless.

One of the best spent hours of my life was with Peter G. Fitzgerald. Senator Fitzgerald served Illinois from January 1999 until January of 2005. In those years he fought tooth and nail for Illinois residents for good government. One of his greatest achievements was the appointment of Patrick J. Fitzgerald as the U.S. Attorney for the Northern District of Illinois. Patrick Fitzgerald has exposed more clout, corruption, and crimes, than anyone to date. Peter G. Fitzgerald is a fan of ChicagoClout.com. What an honor. Enjoy this picture, I know I do. 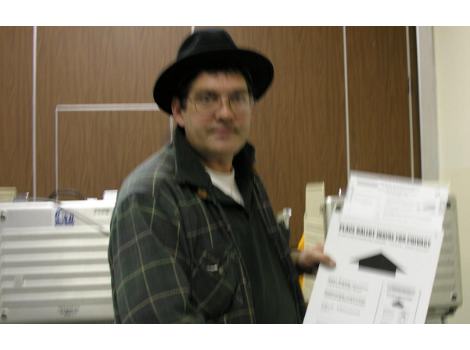 Today at the North Shore Baptist Church, I cast my vote, so I am legally entitled to bring my opinions on the Chicago Political scene. The corner of 5244 North Lakewood was littered with Mary Ann Smith’s crew that asked me to sign a petition so she may run for office again. I took a pass. They remembered me well, but their memories got hazy at my Chicago Residency Hearing, I am not real impressed with the 48th Ward Clique. Also, we need to look into the TIF’s real close, For the “Long and Short” of the issue. (Wink). I hope everyone voted. A nervous poll watcher took this photo, and I was asked what I was doing with a camera by several nervous other poll watchers. Sorry about the poor picture of Patrick McDonough, the camera adds about 60lbs.

Well, the election day is almost here. November 7, 2006 will settle the brawl. Tony Peraica and Todd Stroger take the last few swipes. May the best man win. God luck and God Bless. Best of luck to the next President of Cook County. Tony Peraica’s “Final” Rally
When: Monday, November 6th, starting at 6:30 PM
Location: Red Ivy (3525 N Clark St)
Price: This is a free event
Details: The Reform Revolution is starting to sweep across Cook County. With neck-to-neck polling results (and a rumored Durbin and Obama Rally for Stroger on Monday night) it is important that we show our support for Tony Peraica. Tony will be on stage at 7PM so please come on-time! Photo by Patrick McDonough.

Michael, David and Patrick McDonough enjoyed a chat with Alderman Todd Stroger at Plumber’s Local 130 in Chicago. I must say Todd Stroger, (Alderman 8th Ward Chicago) the son of former Cook County President President John Stroger Jr. was very kind to my sons and I. Todd is in a very difficult race against Commissioner Tony Peraica for Cook County Board President. This is a typical Chicago Political Clout and Democrat Machine Candidate vs. a credible outside reformer. Unless the ballots are again rigged, I think we will have a great race. Since I did most of Tony Peraica’s photography used in his campaign, I know Tony Peraica brought the Political fight into Todd’s neighborhood. Photo by Patrick McDonough.

Please read this article by William S. Bike and Mark J. Valentino “Gloves off in 11th District Commissioner race. Good reading. Also look for the 11th District recommendation, I could not get a direct link, sorry. http://www.nearwestgazette.com/Archive/1106/Editorial1106.htm#11th_District,_County I respect Carl Segvich for speaking his mind on the issues. But remember the Daley family are special roman catholics. Ole Cardinal George type catholics. Politics first, God second. 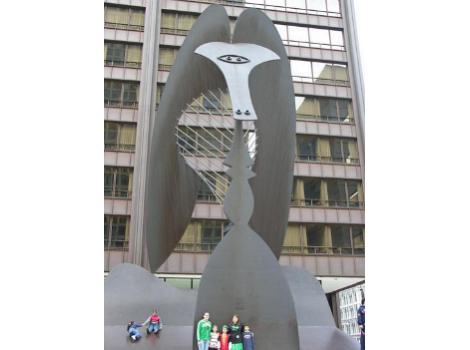 I went to court today as the Chicago Law Department wants to overrule The City of Chicago Department of Human Resource’s (Personnel Board) decision to rehire me. (Patrick McDonough) It is a status of the case City of Chicago v. Patrick McDonough. Court was held in Judge Stuart Palmer Courtroom today at 10:30 a.m. Eileen Geary, Chief Assistant Corporation Counsel, made it seem as though Mr. Patrick McDonough was blowing off court dates. The truth is Patrick McDonough, the Whistle-blower of the Hired Truck and Hiring Scandal, which continues unabated, was left at work with no transportation to court. Another trick used with McDonough’s witnesses at the Residency Hearing that sparked more investigations by the Federal Government. After explaining to my boss this morning, I must appear in court, my boss knew nothing about my required appearance. After Judge Palmer listened to Mr. Frank Avila, he ruled to give us the time to resolve issues that conflict our Federal Court Lawsuit. After court, I went back to work and found out the Chicago Department of Water Management will not pay me for appearing in court, despite the Judges demand to appear. I am happy to report, I called the Inspector General to investigate and the Personnel Department is now involved to make things right. Thank you Frank Avila, Chicago City Workers best choice in lawyers. Next court date: January 12th, 2007 at 10:30 a.m. patrick McDonough at the Daley Center.

I am very happy to get the exclusive on this. Our next election in Chicago and Cook County will have 17 election polling places with video out side the entrances to monitor the exact amount of people actually voting and the results will be reviewed, tabulated, and sent to the “Appropriate Parties” for review and inspection. Wink, Wink. Also 35 people will wear wires and mini cameras while they perform their duties as Poll watchers. Gee, technology sure evens out the playing field. So to Chicago, Vote early and often, at your own risk. Patrick McDonough.