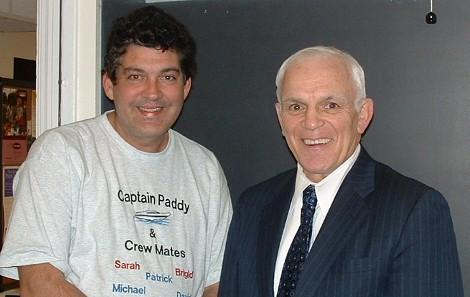 On November 16, 2006, I had the opportunity to ask several questions of Cook County State’s Attorney Dick Devine.
As we all know, I hate to waste a chance to grill the high and mighty. I am lucky as I am not a member of the main stream media, and I do not need to face many of the politicians I meet, on a regular basis. I hope you understand, I have respect, but I do not ask soft questions. I was really queasy with Dick, because he does not make good eye contact, and I cannot stand that in a politician. My first question was about Jon Burge and a very long answer ensued. Dick brought up Aaron Patterson and I guess he was not as offended as I thought he would be at Jon Burge’s actions. It seems he was relieved about the Statue of Limitations and he did not need to prosecute Jon’s deeds. Next, I asked about the hiring of Alexander Vroustouris, a disgraced former Inspector General of Mayor Daley’s Administration, the former Inspector General only chased low level employees and not the Clout heavy crooks that steal millions from Chicago Taxpayers. I also asked about his investigations into Political Corruption in Chicago. Dick said, He hired Voustouris, and Al was not able to catch the big fish in Chicago because the lack of money and Dick said he could not investigate political corruption due to the limited resources he has.

]]><![CDATA[ <p>I am really offended by the hands off attitudes many Chicago and Cook County Politicians have regarding the importance of Clean and honest Government. In many cases, we chase a young person making a bad decision, but are not a concerned about millions of dollars stolen from the Taxpayers as the crime does not seem as personal. Well, I hope things do not need to bottom out before we get wise, and look closer than ever, to our elected officials. Patrick McDonough and thanks to Mr. Joyce for the great picture.