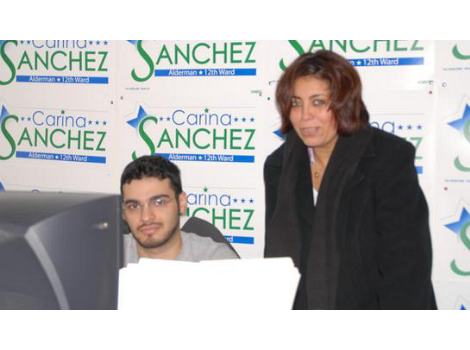 I dropped into the 12th Ward with out any warning tonight. I am also working late. A staff of volunteers were working hard giving it their all. I must admit these people are working very hard and are committed to Carina Sanchez, a great choice for Chicago’s 12th Ward. In the picture is Lenn Sanchez and Ana Nonez, both very loyal and a credit to the American ideals of Freedom. I asked if any political tricks were cooking in the 12th Ward, they said none. A good honest campaign in the 12th Ward? I hope the rest of Chicago will be that lucky. Photo by Patrick McDonough.