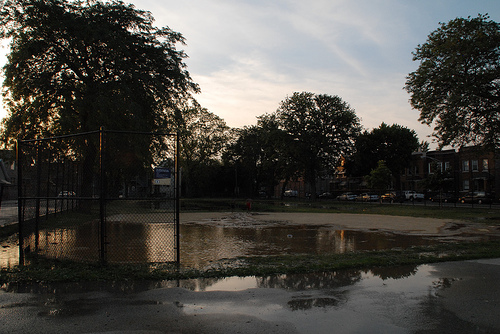 On July 8, 2007, the Chicago Department of Water Management responded to yet another open fire hydrant. All afternoon, we saw kids playing in the streets, and parents that allowed kids to laying in the curbs, to cool down. We need to remove the tires on the Fire Hydrant A.S.A.P. This is Bosley Park, part of the Chicago Park District. Some kids had opened the Fire Hydrants flooding and damaging the park. Neighbors were following me around with video cameras, and demanding why it took so long to turn the fire hydrant off. Some kids were verbally assaulting my crew, but we said nothing back and completed our tasks. We need to make open hydrants a top priority. Photo by Patrick McDonough.