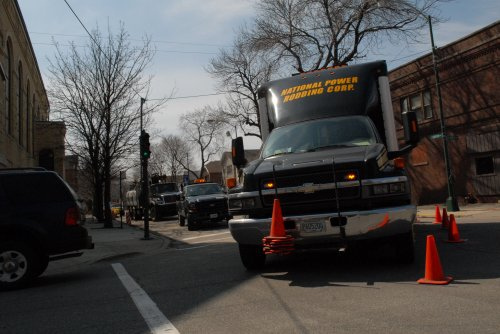 Thanks to Mayor Daley and the corruption in Chicago, stories never end. I many times come across stories that that just bother me greatly. This is a story that starts about April 1, 2008. April fool’s Day haunts me because it is the anniversary of the day I was fired from the City of Chicago. I knew that act was to send a signal to Chicago City Workers to clam up to the corruption. I got a call from my ever expanding network of Chicago Clout Inspector Generals and got a tip on this story. As a Roman Catholic, I despise this story. I sent this story out in hope a major Chicago Newspaper would look into this, thus letting me off the hook. I think I still have Catholic Guilt at an abnormally high rate. Here we go….
In early April, a crew was sent to investigate a flooding problem at Nativity of the Lord Church in Bridgeport, Chicago, Illinois. This church is loaded with clout including the Daley Family and Robert Sorich. When Robert Sorich got busted by the Feds in Daley’s Hiring Scandal, Nativity had a fund raiser for Sorich. Sorich is still out of jail due to clout reserved for royalty. The Chicago Department of Water Management sent a large amount of crews on the taxpayer’s dime to help with this church’s sewer problems. Vactor crews, Investigator crews, sewer crews, and multiple supervisory staff were sent in. Private contractors such as National Power Rodding Corporation were sent to assist. More info click here: http://www.mmsd.com/docs/procurement/bid/bid_20060926074517.pdf The Central District might have been able to do the jet rodding if the Vactors were repaired correctly. Vactors are large trucks that suck sewer waste and sewerage out of basins. Vactors also jet rod sewer mains. In the old days, the districts were cut into quadrants; each quadrant would have two Vactors to ensure the sewer basins were maintained. Central District was down to only one Vactor with a barely working jet rod. There are three Districts in Chicago. Chicago needs a total of twenty four Vactors per shift city wide to protect and maintain the Chicago Sewer System. Back to the story… within three days a massive amount of work was done to repair the church’s sewer. (Or as we say their “P.D.”) A crew was sent back at the end of the job and fresh concrete was poured on the sidewalk. This was proof to me the Chicago City Worker can outwork any private company. Nativity of our Lord motto is “Serving God and the Bridgeport Community”. If you are in the know, you are laughing because Nativity got some really great service on the taxpayer’s dime. The “Mayor’s free sewer program is for private homes and up to four unit buildings. This afternoon, I spoke on the phone with Father Brandt regarding the costs in the sewer repair and found him to be very nervous and guarded. He said some things about the Business Manager and $11,000.00 in prior plumbing bills. I leave the rest of the talk at that. I hope the Chicago Inspector General looks into the way this job was handled. Am glad I am done writing this story and I feel better, like I had a confession. Please do not take this personal, but I do not like the way they do business in Bridgeport. Thy Shall Not Steal. Maybe they could have a fundraiser to pay the city back, right Mr. Sorich? Photo by Patrick McDonough