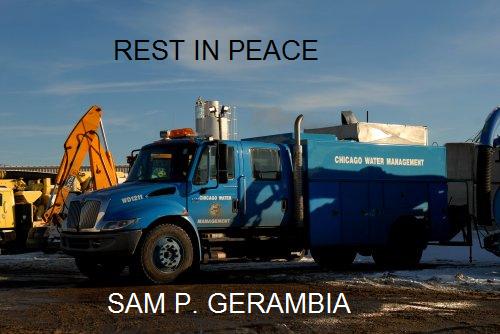 On May 11, 2008 our fellow brother at the Department of Water Management, Sam P. Gerambia died without warning. I think Sam looked at the world from a different viewpoint than many of us. Sam had a wife and two children. Sam was a Caulker and member of Journeymans’ Plumber’s Local 130. U.A. I hope someone in the North District starts a fund for Sam’s wife and children. John Spatz should make this worthy cause go forward. Photo by Patrick McDonough

I have to give credit where credit is due, nice job Chicago Office of the Inspector General. Chicago Teamsters got a big second chance when the Hired Truck Scandal hit. Many part time employees, (seasonal) at the Chicago O'Hare Airport are now full time employees. Many of the MTD drivers knew of the upcoming drug test thanks to their boss. If you think HDO is still not a force with the drivers you are sadly mistaken. Much of Chicago Licensing agencies are still very corrupt, people are allowed to take tests that are not legally qualified. Mayor Daley's Chicago Building Department needs an overhaul as corruption continues. Someone tell those guys to stop taking bribes and insist the work completed for taxpayers is done correctly. Make sure you read Fran Spielman's article below. Patrick McDonough END_OF_DOCUMENT_TOKEN_TO_BE_REPLACED

A former city of Chicago Employee was carried away by ambulance from the Department of Human Resources at Chicago City Hall today. Many people have no concept of the stress involved in attempting to get your job back. Politics played a part in this man's termination. Many families lose homes, savings, and pensions from losing a job. This man was in a hospital fighting for his life earlier in the day. I hope Mayor Daley looks into the fate of Gary S******. Mayor Daley looked the other way when his son was involved in a Sewer Scandal, maybe he should look out for a young man that refused to take a drug test for moral and ethical reasons. Some people refuse to take a drug test because they know how the City of Chicago is run under Daley. It would be a shame if the person that made the accusations against Gary proved to be in a position he should not have been in. I hope this man will return to work after a fair trial. Patrick McDonough.

Many City of Chicago Employees were ordered today to sign documents, proving they received the Memorandum explaining when they will receive their settlement checks from the City of Chicago. You will need to download Adobe Reader to read the attachment. With-in moments of Patrick McDonough reading the document, he was assaulted by a co-worker. The vicious assault included comments peppered with terms such as "Asshole", "Put that on your website", everyone got their job from politics, Asshole"! The worker assumed a posture of a pending beating. I do not understand why someone would make threats with numerous witnesses. I cannot tell you how difficult it has been working for the City of Chicago when there is still people that do not want to change. It has carried a large toll to be retaliated against day after day while helping change the working conditions of the non-clouted worker. Please contact me if you are subject to retaliation. Click on the PDF file below. Patrick McDonough END_OF_DOCUMENT_TOKEN_TO_BE_REPLACED 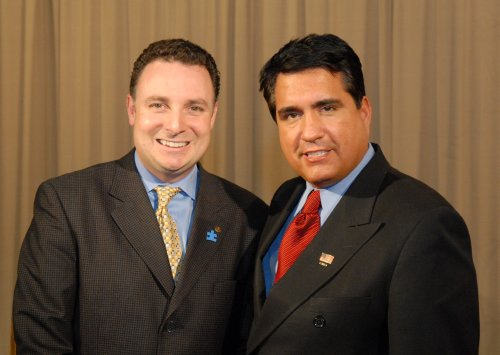 Please make sure you watch the videos produced by Chicago Clout to address the issues facing families with autism. Frank Avila hosted Issue Forum: Autism. Many Chicago families need a network to help get through the ups and down autism can cause. Special thanks to Tony Joyce for show production. Pops and Bill, thanks. Make sure you watch these shows… Friday May 9, 2008 11:00 p.m. CAN-TV 21; Saturday May 24, 2008 6:30 p.m. CAN-TV 21; Saturday May 31, 2008 6:00 p.m. CAN-TV 21. Photo by Patrick McDonough

I read Mr. James J. Laski’s book in its entirety. I was very happy with the book as it really tells us the life of a Chicago Political Heavyweight. I was honored James J. Laski agreed to do a show. I suggest every Chicago Taxpayer read his book. This is my impression of the book, James J. Laski trusted his friends with his heart and soul. The rats that sold him out have made a permanent scar on him he may never get over. I saw him as a average south side guy that still might like a beer, but hopefully will never touch a cigarette again. James J. Laski’s book should be enjoyed, slowly. Watch Mr. Laski with host Frank Avila Tuesday May 6, 2008 at 10:30 p.m. and Tuesday May 20, 2008 10:30 p.m., both shows are on CAN-TV Channel 21. James Laski might have left a big part of the book missing, the part about putting his family back together again. I was wondering who proofread his book and I look forward to another show with Mr. Laski. Story by Patrick McDonough, Photo by Michael McGann.